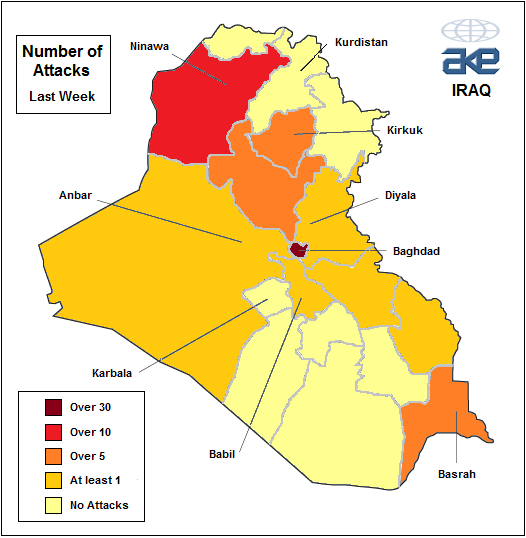 By JohnDrake on 2nd December 2010 in Weekly Security Update

After a quiet ‘Eid ul-Adha levels of violence rose again last week, with at least 46 people killed and over 110 injured in attacks around Iraq. The majority of violence was concentrated in Baghdad and Mosul, with a scattering of activity around Kirkuk, Ba’qubah and the northern fringes of Salah ad-Din province. Basrah airport was also subjected to a spate of mortar attacks, although no casualties were reported. Over the coming weeks militants may attempt to discredit the efforts of Nuri al-Maliki to form a government, while the holy month of Muharram will begin around 7 December and this will likely see a rise in attacks on the Shi’ah community, particularly pilgrims, including Iranians, travelling to the ‘Atabat (holy cities) of Kadhimiyah, Karbala, Najaf and Samarra.

Levels of Violence Over the Past Six Months

Iraqi Kurdistan was quiet last week, but there was a rise in violence in the provinces of Ninawa and Ta’mim. Around Kirkuk, concerns have been mounting for weeks that a census, planned for early December, would provoke inter-communal tensions. A rise in murder and intimidation campaigns against civilians on account of their ethnic background was anticipated. However, the census has now been delayed indefinitely, postponing the associated tensions and allowing the state and security forces time to manage the task. Nonetheless, the security situation will remain fragile in the two northern cities of Mosul and Kirkuk, with the Christian community being targeted in particular at present. The Iraqi police and military also continue to suffer the majority of attacks.

Last week saw a rise in levels of violence in the central provinces. Attacks were concentrated in Baghdad as per usual, but there was also a cluster of incidents around Ba’qubah in Diyala province and in some of the northern districts of Salah ad-Din province, particularly Tuz. It is likely that Sunni militants in the region will be watching Nuri al-Maliki closely over the coming weeks. If he is successful in forming a functioning government to the exclusion of what is deemed sufficient Sunni representation it could provide them with propaganda material for recruiting more supporters. Over the coming weeks there may also be a rise in the number of mortar attacks directed against the International/Green Zone.

Aside from a series of police operations around Basrah and Maysan provinces the south of Iraq was relatively quiet last week. However, there was a series of indirect fire (rocket and mortar) attacks on Basrah airport. While no casualties were reported, the incident highlights the fact that militants remain a concern in the region. The number of incidents taking place is far lower than in the centre and north of the country but threat groups are still able to launch attacks, even when security measures are heightened and against what should otherwise be one of the most well defended facilities in the south of the country.

One Response to Weekly Security Update for 2nd Dec 2010