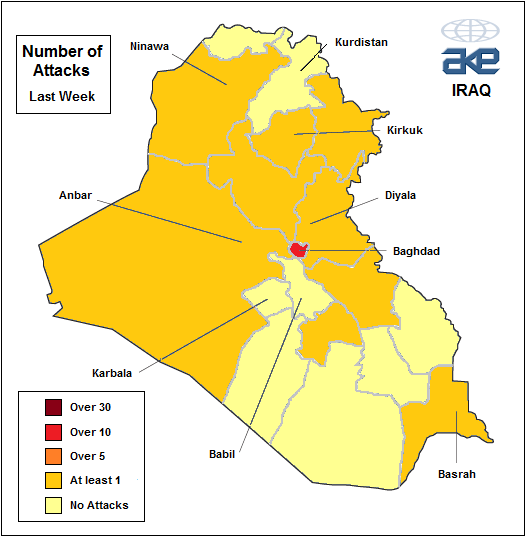 By JohnDrake on 15th December 2010 in Weekly Security Update

Levels of violence fell in Iraq last week for the third week in a row. However, conditions have started to deteriorate once again with a rise in attacks since Sunday, particularly in the central provinces and Baghdad. The number of terrorist attacks is likely to increase further over the coming days, despite numerous police operations, heightened levels of security and dozens of recent arrests, with the main militant focus being on Shi’ah pilgrims gathering to commemorate al-‘Ashura.

Last week was very quiet in the north of Iraq, with Mosul and Kirkuk seeing an unusually low number of attacks. A small protest in Sulaymaniyah turned violent on 9 December with three people injured in scuffles with the police. The demonstration was against the construction of a fuel station on land previously allocated for a hospital. However, this should not be taken as grounds for concern about safety levels in Kurdistan. The clash was far less violent than protests taking place at the same time in central London, although the construction sector is reminded of the possibility of discontent with building proposals. Consultation with local communities is always recommended as one of the most effective means of mitigating security risks.

Around half of the attacks recorded in Iraq last week took place in the capital alone, although there was also a spate of terrorist attacks in other central areas such as eastern Anbar province and western Diyala province. The security forces managed to prevent a number of suicide bombers from attacking police and civilian targets, although a provincial government building was hit in Ramadi and a Shi’ah procession was attacked near Ba’qubah. The government building was likely targeted in retaliation for a recent spate of police arrests, while Shi’ah religious travellers are likely to suffer more attacks over the coming days. Many will be travelling to Karbala for the religious event of al-‘Ashura (further details on the event are contained here).

The south was relatively free of violence last week, although US military bases and convoys continue to be attacked on a fairly regular basis. US installations continue to come under mortar fire, while high-profile vehicles continue to suffer occasional roadside blasts. Fortunately, casualties are infrequent although the US military recently pointed out that attacks around Basrah Airport continue to disrupt flight schedules and deter would-be investors. While militancy was tackled in the region in early 2008 there are still threat groups around Basrah with the intent and capability of targeting foreign interests, both civilian and military.