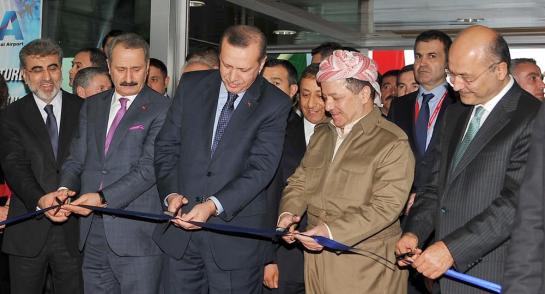 After welcoming Prime Minister Erdoğan and the rest of the distinguished guests, President Barzani said that he was very pleased that the Prime Minister joined him in launching the Erbil International Airport on this historic day. He said, “This [airport] is the first step to building a strong infrastructure in all of Iraq, and especially in the Kurdistan Region, and it is a key to many large scale projects to develop the Kurdistan Region and Iraq as a whole.”

Regarding Prime Minister Erdoğan’s visit, the President said, “We consider this to be a very historic moment. We believe that this visit will build a very solid bridge in bilateral relations between Iraq and Turkey and between the Kurdistan Region and Turkey especially.” The President commended Prime Minister Erdoğan for his courageous policies in Turkey and the wider region. Due to the Prime Minister’s wise decisions Turkey is playing a strategic role in the region, and the region wishes him success in the upcoming elections, he said.

Prime Minister Erdoğan said “We have historical and cultural bonds with Iraq, and with this beautiful region, now we’ll be connected by airways. But, I don’t want to call it airways, rather I want to call it ‘the way of the citizens,’ and through this way of the citizens we will be connected to each other and connected to the rest of the world.” He went on to say that Turkish Airlines would begin flights to the new airport on April 14th this year.

After the inauguration of the new airport, President Barzani joined the Turkish Prime Minister and his delegation at the opening ceremony for Turkey’s new Consulate General in Erbil. The leaders marked the event as another significant step in the mutually beneficial commercial and political relationship between the Kurdistan Region of Iraq and the Republic of Turkey.