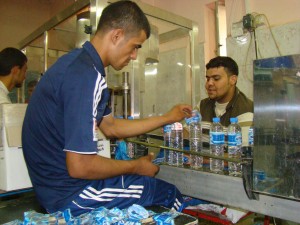 Much gets written about the struggles of small businesses in Iraq. With 36 private banks in Iraq, and high interest from the Government of Iraq to support MSMEs, especially in terms of access to finance, we need to dissect the structural barriers faced by small businesses, in order to ensure that interventions designed for them are both productive and sustainable. Allocating $200 million for MSMEs in the 2011 budget was a thoughtful suggestion by Prime Minister Malaki’s economic advisor Abdul-Hussein Al-Anbaki, but at 2% interest rates (or service charge) would have been detrimental to the broader credit culture that the microfinance industry and banks are trying to build. In addition, the suggested methodology of delivering credit or loans to MSMEs was to be undertaken directly by the Ministry of Labor and Social Affair (MOLSA), and hence not in-line with best practice as government agencies don’t have the required core competency of delivery. While the Government’s 2011 budget did not approve the $200 million assistance for MSMEs, approval is likely in the supplementary budget. Ideas sYnergy hopes that some of the insights below, collected from multiple stakeholders, banks, microfinance institutions, MSMEs, etc will provide initial feedback and debate in the corridors of power.

First, at the basic level, MSMEs need sustainable access to finance
MSMEs don’t borrow once, but more than once, for initial investment, for working capital, and for business expansion. Delivering one-time credit through government agencies is not only counter intuitive but also counter productive to the work of Iraqi microfinance institutions and banks alike. GoI needs to facilitate financial intermediation through the intermediary infrastructures available, as well as focus on those regulatory initiatives that help scale-up intermediation capability of both banks and non-banks.