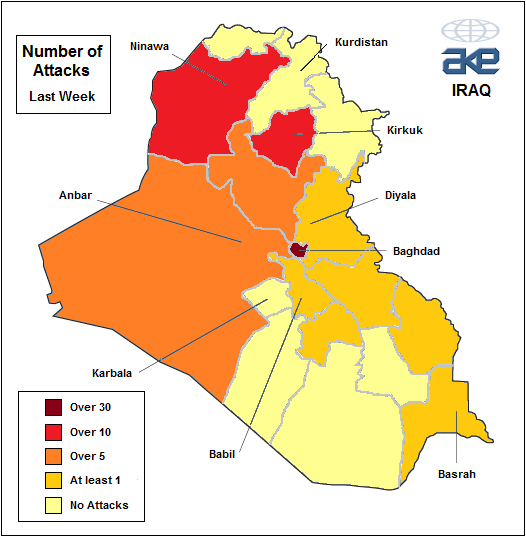 By JohnDrake on 30th June 2011 in Weekly Security Update

Levels of violence rose again in Iraq last week, as part of what appears to be a gradual trend which has evolved over the past six months. Last week saw attacks concentrated around Baghdad, Mosul and Kirkuk, with several more incidents in Anbar, Diyala and Salah ad-Din provinces. The southern provinces have also seen a slight rise in militant activity of late. As well as the police, Iraqi army and government, the US military and other foreign interests have also been singled out in a number of recent attacks. It appears that June has been the deadliest month for US troops in a long time. The past fortnight has also seen a number of attacks against what should be well defended compounds. Organisations are therefore advised to review the security measures at their accommodation and place of work. For further details please email [email protected].

Kurdistan remains quiet with no incidents reported last week. However, conditions worsened in the neighbouring provinces of Ninawa and Ta'mim. There were four reported kidnaps in Kirkuk, targeting professionals or their family members, with the responsible criminals likely hoping to secure a ransom for the victims' release. Kidnap for ransom remains an ongoing concern in Iraq, and the country remains one of AKE's top 10 world kidnap hotspots. If you would like to receive our upcoming quarterly kidnap report please email [email protected] for details.

There was a rise in terrorist activity in the central provinces last week, with several attacks, predominantly in the districts surrounding Baghdad and in towns along Highway One as it passes through Salah ad-Din province. In the capital a series of bombs in a market area in Shurtah ar-Rabi'ah district left 25 people dead and 35 injured, while several more attacks (including some involving the use of sticky bombs) took place in districts which are normally well patrolled by the security forces, such as Jadriyah and Karradah. Militants appear to have become more emboldened in the city and organisations are advised to review their security measures as a result.

The southern provinces are still more quiet than some of the central and northern provinces but incidents have been occurring more frequently over recent weeks, with a rise in the number of indirect fire attacks (rockets and mortars) and roadside bombings, particularly targeting US military bases, secure compounds and airports. While the majority of attacks are being conducted by anti-foreign Shi'ah militia groups recent suicide attacks against a police compound in Basrah and a provincial government facility in Diwaniyah demonstrate that radical Sunni groups are also attempting to conduct attacks in the area. Organisations are advised to review the security measures at their accommodation and place of work while transport arrangements should also be re-examined amid the risk of roadside attacks, most of which are targeting high profile convoys and military patrols. For further information and advice please contact [email protected]