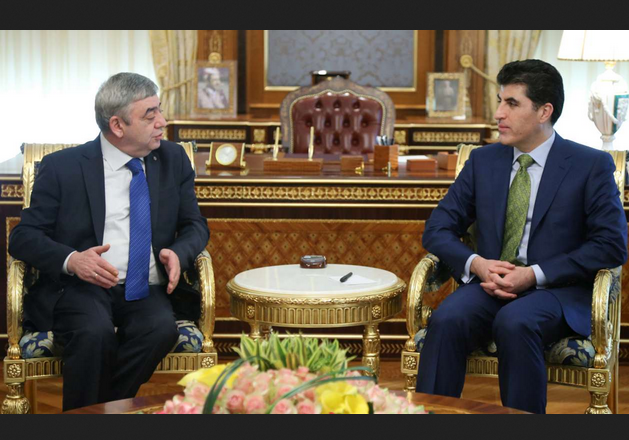 Mr. Sargasyan conveyed the greetings of the President and Prime Minister of Armenia to Prime Minister Barzani and stressed his country’s desire to build solid ties with Erbil.

In this regard, he proposed the formation of a joint friendship commission between the Kurdistan Region and Armenia, that would work to develop cooperation in a number of fields like culture, trade, economy and other areas of common interest.

The guest delegation also expressed its government’s desire to open Armenian Consulate in Erbil in the near future and start direct flights between Erbil and Yerevan.

Mr. Sargasyan pointed out that his country’s private sector is also interested in investing in the Kurdistan Region, for which he asked for Kurdistan Regional Government’s assistance.

Prime Minister Barzani welcomed the decision of opening the Armenian Consulate in Erbil and starting direct flights to the Kurdistan Region.

He said, he will fully support the formation of a joint friendship commission between Erbil and Yerevan, which would discuss those areas where both sides can work together, adding that the Kurdistan Regional Government is prepared to assist Armenia’s private sector to invest in the Kurdistan Region in accordance with the investment laws of the Region.

The Prime Minster stressed the importance of political and economic relations between the two sides, as well as developing educational cooperation, particularly in the field of providing scholarship to students wishing to study in Armenia.

4 Responses to Armenia to Open Consulate in Erbil