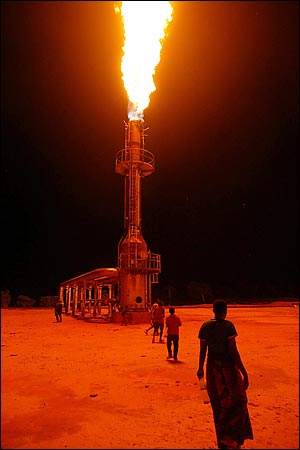 By GavinJones on 10th May 2010 in Construction & Engineering In Iraq, Iraq Oil & Gas News

Iraq plans to boost power capacity to 27,000 megawatts in four years after opening its gas sector to foreign investment and sealing a gas capture deal with Royal Dutch Shell, a minister said on Sunday.

The OPEC member would need to invest at least $3 billion to $4 billion per year to reach that target, Iraq’s Electricity Minister Karim Waheed told Reuters on Sunday.

He did not say how Iraq plans to raise such funds. It has struggled to finance its previous power generation plans.

Reaching the ambitious power capacity target would depend mainly on finalising a venture with Shell to capture and use gas now being burned in the southern oilfields around Basra, and on output from three gas fields, which Iraq is auctioning off in September, Waheed said.

‘This depends on both the gas fields — the announcement for the third round — and on capturing the burned gas deal with Shell,’ he said in an interview on the sidelines of an energy conference in Qatar.

Waheed said if Iraq does not come to an agreement with Shell, the ministry will have to rethink its power plans.

Iraq is close to signing a final deal between its South Gas Company, Shell and Japan’s Mitsubishi, after it sent the final draft of the agreement to the cabinet for approval, Iraqi Oil Minister Hussain Al Shahristani said on Thursday.

Waheed said he expects the gas fields now being tendered to start producing in two to three years.

Iraq plans to issue new tenders next week for installing turbines as part of the ministry’s plans to boost electricity capacity, Waheed said.

In 2008, it said it had agreed a 1.5 billion euro ($2.03 billion) deal with Siemens for 16 gas turbines and a deal with General Electric worth $3 billion for 56 turbines. The turbines are expected to add nearly 9,000 megawatts of capacity over the next few years.

Iraq scrambled for ways to finance the purchase after a plunge in oil prices in 2008 deprived it of revenues and forced it to slash its 2009 budget three times. It had offered investors stakes in the electricity turbines it has ordered, and said it would repay investors from future electricity sales.

‘Next week, we will tender for bids for installing turbines at two more sites, at Baiji for six turbines of 160 MW and Kirkuk for one turbine of 260 MW,’ Waheed said.

‘Some 38 companies will participate and compete for the deals. Just to install the turbines, we’ve already bought the turbines.’

Frequent fuel shortages and constant maintenance are a main reason behind the shortfall in available power capacity in Iraq, where dilapidated infrastructure has been hit hard by years of war, insurgency attacks and underinvestment.

Seven years after the U.S.-led invasion, Iraq’s national grid still only supplies a few hours of power each day. Intermittent electricity is one of the public’s top complaints.

Baghdad, the capital, is expected to enjoy about eight hours of electricity a day when temperatures hit 50 degrees Celsius in the summer, Waheed said.

With the new power plans, Baghdad, with current 3,000 MW of power available, could finally have 24 hours a day of electricity in two years.