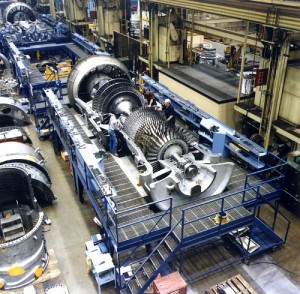 By GavinJones on 11th May 2010 in Construction & Engineering In Iraq

Iraq's Electricity Ministry has invited foreign companies to bid to install 20 gas turbines that would boost the country's power capacity by 2,500 megawatts in the next few years, an Iraqi official said on Monday.

In 2008, Iraq agreed a 1.5 billion euro deal with Siemens for 16 gas turbines and a deal with General Electric worth $3 billion for 56 turbines.

The turbines are expected to add nearly 9,000 megawatts of capacity to a country starved of power after decades of war, sanctions and economic decline.

The 20 turbines were purchased from GE, and each generates 125 MW, said Laith al-Mamury, the head of investments and contracts in the Electricity Ministry. The turbines would be installed in Baghdad, Kerbala and Diwaniya provinces.

"Some of these turbines will arrive soon... So far, we have received eight turbines from GE. We should receive a total of 32 GE turbines this year," Mamury told Reuters in an interview.

"The companies will present their bids within a month," he said, adding that the installation process involves engineering, procurement and construction contracts.

He did not give an estimate for the contracts, but according to previous data from the electricity ministry, they are worth roughly $350,000 per installed megawatt.

The ministry also plans to issue new tenders for installing eight turbines with total capacity of around 1,900 MW, in three locations, Kirkuk, Baiji and Basra, he said. Those turbines are part of the Siemens deal.

Around 36 companies have been shortlisted for the tender, said Mamury. Among them are Korea's Hyundai Heavy Industries, Swiss engineering group ABB AG, Canada's SNC-Lavalin Group Inc. and Kuwait's al-Ghanim Company.

Iraq plans to treble power capacity to 27,000 megawatts from 9,000 MW in four years after opening its gas sector to foreign investment and sealing a gas capture deal with Royal Dutch Shell, the electricity minister said on Sunday.