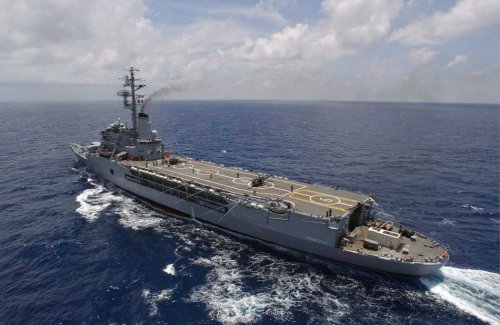 A French navy ship with 95 sailors on board docked Tuesday at the southern Iraqi port of Umm Qasr, in the first such visit in 32 years amid French efforts to "revive" ties with Baghdad.

The two-day stop by the Ducuing, a military dispatch ship, began with a reception organised by the Iraqi navy, who offered their French counterparts Qouzi, a traditional Iraqi dish made of freshly-slaughtered sheep and rice.

"The purpose of this visit is to revive and rebuild the friendly relations of old between the French and Iraqi armed forces," Ducuing commander Captain Jean-Olivier Grall told AFP.

"The French army and navy are ready to cooperate with the Iraqi navy. This can occur in several areas as part of training and regional cooperation," he added.

The ship and its 95 sailors arrived in Umm Qasr, at the southernmost tip of Iraq and where the Iraqi navy has deployed extensive security measures in a bid to prevent possible attacks, from the Saudi Red Sea port of Jeddah.

"We are honored to resume this tradition, we are the first in 32 years to dock here," Grall said. "We are rediscovering a place that has been somewhat overlooked."

"We are very pleased with this visit," he said. "It is all part of developing relations between the French and Iraqi navies."

"In the future, we hope to develop strategic relations with the French navy, which is a very experienced force."