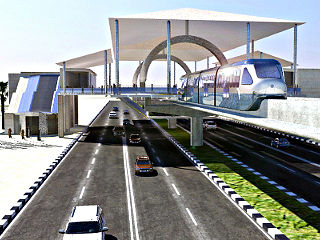 By Editor on 30th June 2010 in Construction & Engineering In Iraq, Iraq Transportation News

Reuters reports that Iraq's city of Najaf has awarded a Canadian company a $600 million contract to build the country's first monorail.

Anwar al-Haboobi, a member of the Najaf investment committee, told Reuters the project will be only the second of its kind in the Middle East after Dubai. The contract was awarded to TransGlobim International (Globim), a privately-owned Canadian consortium.

The monorail is one of a number of large-scale infrastructure projects discussed by Iraqi officials since the fall of Saddam Hussein, including a plan for a multi-billion dollar Baghdad metro, none of which has yet been built. Najaf, one of Shi'ite Islam's holiest sites, hosts hundreds of thousands of pilgrims at rites several times a year, jamming its mediaeval streets.

"This project will ease the transport crisis and the clogged streets in the province, especially during the blessed days of rituals," Haboobi said.

The Najaf monorail project will be finished in three years and be carried out in two stages, Haboobi said. The Canadian company will build a power plant to run the train, he added.

* All guideway components will be pre-cast and assembled on site

* Trains will be powered on a straddle system