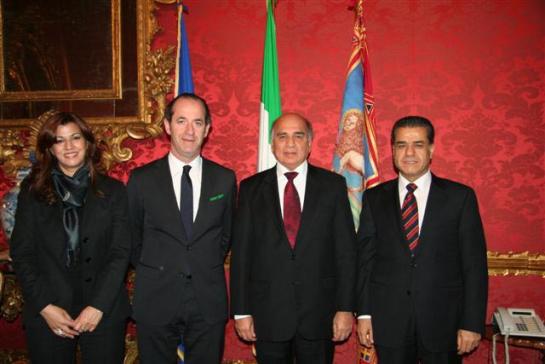 By Editor on 2nd February 2011 in Iraq Industry & Trade News

The Kurdistan Regional Government (KRG) signed a broad agreement with the Veneto region of Italy in Venice to strengthen political, economic, and cultural ties.

The Memorandum of Understanding (MOU) was signed on behalf of Kurdistan Region’s President Masoud Barzani by his Chief of Staff Dr Fuad Hussein, and by the President of Veneto Region Luca Zaia. The agreement will enhance the Kurdistan Region’s ties with the Veneto Region in the fields of agriculture, vocational training, education, universities, cultural tourism, the environment, and diplomatic and political relations.

Dr Hussein, who was accompanied by the Head of the Department of Foreign Relations Minister Falah Mustafa Bakir, and Ms Rezan Kader, the KRG’s High Representative to Italy.

At the signing ceremony in Veneto’s Regional Government offices at the Palazzo Balbi, Minister Bakir said, “Veneto is a prosperous region with a remarkable culture and history. We already have good ties with Veneto and this MOU will help us to work more closely together. There is good potential to make this relationship a mutually beneficial one. I hope that Italy, which is very active commercially in Kurdistan, will open a full consulate in Erbil.”

President Zaia said that the Kurdistan Region is strategically important, with its own government and parliament recognised in the Iraqi constitution and powers over many areas of policy, from education to economic development, infrastructure and culture.

Ms Kader said, “The Kurdistan Region has been experiencing major economic and social progress in the past few years. Kurdistan is an ancient civilisation that for the first time in many decades can make the most of its human and natural resources.”

She added, “International friendships are vital to our progress, hence our desire to partner with other federated and autonomous regions such as Veneto on social welfare, education and commerce."

Mr Franco Frattini, Italy’s Minister for Foreign Affairs, gave his full backing to the MOU with Veneto, which the KRG suggested in 2009. President Zaia received an invitation from President Barzani to visit Kurdistan, which he accepted.

Veneto’s President said that he will convey to Minister Frattini the need to open a Consulate in Erbil. During President Barzani’s visit to Rome in October last year, Mr Frattini said that Italy intends to participate in Iraq’s economic recovery and to work in Kurdistan Region, where Italy already has excellent relations.