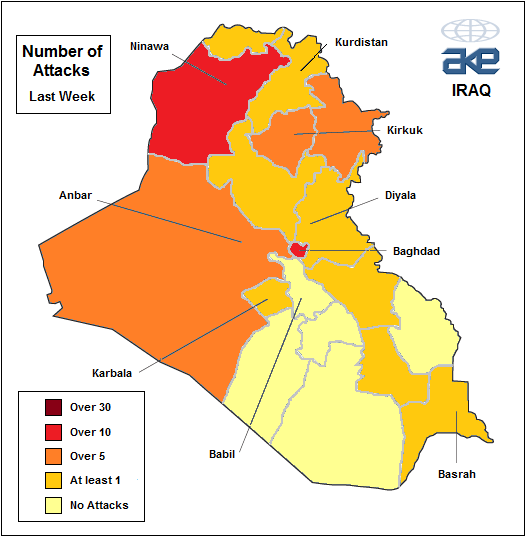 By JohnDrake on 24th February 2011 in Weekly Security Update

Violence continues to creep up in Iraq. As illustrated in this week’s map of incidents, even Kurdistan has not been spared, with a series of protests taking place in urban areas around the region. Indeed the whole country is being rocked by unrest, with a series of demonstrations planned for Friday morning. Personnel should anticipate road closures, curfews and even violence if demonstrators clash with the security forces. Otherwise, conditions are worsening in Kirkuk, and while the south has been relatively quiet of late a series of unconfirmed bomb attacks and a renewed kidnap threat highlights that conditions are far from ‘safe’ in the area.

The most pressing issue in the north is the ongoing unrest in Kurdish cities. The Peshmerga security force presence has been bolstered but demonstrators are continuing undeterred. Offices of the Goran (change) party have been attacked, and a news outlet has been burnt down. Personnel should avoid large gatherings and be prepared for road closures in town centres, particularly around main squares and political offices. Already demonstrators and security force personnel have been killed and injured in the clashes, which may still intensify, although at the time of writing Kurdish politicians are reportedly reviewing a draft of reform measures aimed at addressing the grievances of the protesters. Elsewhere in the north, conditions continue to deteriorate in Kirkuk. Conditions are still not as bad as they have been in the past but a renewed trend of attacks has arisen, with individuals apparently being targeted on account of their ethnic identity.

Protests have been an issue of concern in the central region over the past week as well and security measures are being heightened ahead of a demonstration planned for Friday. Religious and political figures have called for calm at the event but many protesters may still emerge onto the streets nonetheless. Curfews, road closures and even violence should therefore be expected over the coming days. Other recent violence included a bomb attack on Muqdadiya (Diyala province) on 17 February which left at least six people dead and 31 injured. A Shi’ah Imam was also shot dead in an attack outside a mosque in the normally quiet province of Karbala. Baghdad saw a decline in bombing attacks over the course of the week but the International/Green Zone and a military base in the east of the city were hit by several mortar rounds. No casualties were reported in those attacks but evidently there remain militant groups capable and willing of launching such attacks in the city centre.

As usual, the south remains a quiet but potentially hazardous region. There were few major incidents over the past week, apart from scattered protests demanding an improvement in government services. However, unconfirmed reports indicated the possible use of explosively formed projectile weaponry by militants around Basrah. These devices were regularly used against military and private security convoys prior to 2008. Upon detonation they form a molten slug of metal which is able to pierce the armoured hull of a passing vehicle, killing and injuring those inside. It is particularly effective against armoured cars and therefore poses the greatest concern to high-profile US military and private security company vehicles moving around the area. Such attacks are infrequent, but personnel should bear in mind that militants still operate in the area.

A Week of Surprises
MSMEs – A Prerequisite for Inclusive Economic Development