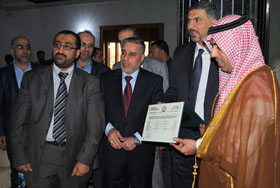 By Editor on 30th March 2011 in Iraq Public Works News

Iraq has awarded a $125 million [150 billion Iraqi dinars] contract to a Saudi Arabian company to build a 150 MW power plant in Basra, an Iraqi official said.

Haider Ali Fadhil, head of the Basra Investment Commission, said the Saudi-based Dao al-Jomaih Group was awarded a contract to build the plant and install two French-made gas turbines. It will take six months for the project to be completed, according to the report from Reuters.

Under the deal, the company will operate the plant and sell the electricity to the province for a three year period after finishing the installation of the turbines, Mohammed Oun, a representative of Dao al-Jomaih said.

Aswat al-Iraq, meanwhile, reports that an Emirati company called 'al-Jameeh Company' was granted the contract, which it values at $153m