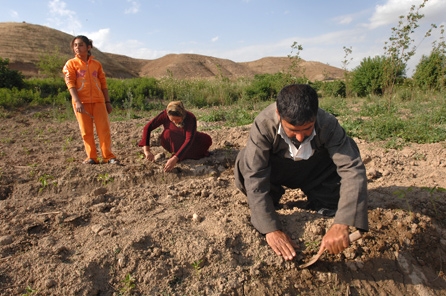 By Editor on 21st July 2011 in Construction & Engineering In Iraq

MAG (pronounced “Mag”) – Mines Advisory Group – is a neutral and impartial humanitarian organisation that clears the remnants of conflict for the benefit of communities worldwide.

Almost 490,000 square metres of land that was heavily contaminated by landmines and other unexploded ordnance (UXO) has been cleared, and will now be used for farming and infrastructure projects.

Teams of MAG deminers – funded by the US Department of State’s Office of Weapons Removal and Abatement, the Dutch Government and the Belgian Government – removed more than 2,700 deadly items from 11 minefields in the Kirkuk sub-districts of Laylan, Qarahanjir, Takya Jabary, Shwan and Altun Kopri over a period of seven months.

"On behalf of the Qarahanjir population, I would like to thank MAG for clearing these deadly minefields,” said the Mayor of Qarahanjir, Avesta Ezadeen, at a handover ceremony that saw the land officially returned to the people.

“I praise MAG's quick response to our clearance requests, and all the work that MAG staff have done since 2003. I hope that MAG continues its life-saving work in Kirkuk in the future."

He said the land would be used for farming and developing infrastructure, vital parts of life for these rural communities.

One of the cleared minefields in Qarahanjir will host a main road project that will link Qarahanjir sub-district with Kirkuk city centre. The project had been suspended due to the presence of landmines and UXO in the area, but following the handover ceremony has now restarted.

Also present at the ceremony were the Head of General Directorate of Mine Action1 technical department, Sarteeb Yahya, members of the local community, landowners, local media representatives and MAG staff from our nearby Chamchamal base.

MAG's Community Liaison Coordinator at Chamchamal, Rebaz Azad, said: “The 1980-88 Iraq-Iran war, the internal conflict between the Kurdish Peshmerga and the former Iraqi military, and the most recent 2003 conflict in this region have caused widespread contamination, which is blocking access to vital agricultural land and land that could be used for development project especially infrastructure and tourism.

"MAG prioritises land clearance to benefit those who need it most.”

Technical supervisor Ismaeel Muhammad, who oversees Mine Action Teams in Chamchamal, explained how MAG uses integrated clearance methodologies to ensure maximum efficiency: “The use of mechanical assets such as the excavators and sifters, and mine detection dogs alongside the manual clearance teams speeds up the clearance process considerably.”