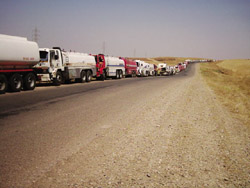 June revenue fell to less than $9m, the Directorate General of Customs reported. This is down more than two-thirds from US$27m in the same period last year.

The office believes that changes to regulations that require quality-control certificates on imports, supplied by just two government contractors, has caused backlogs at border crossings, and reduced customs income.

According to Aknews, Major General Nawfal Salim, the Director General of Customs, said: "The revenues of border customs decreased because of the reluctance of traders and importers to bring in their goods for 15 days [since the regulations were imposed]."

Customs duty was due to go up from 5% to as much as 30% on all goods, but this decision has been postponed.