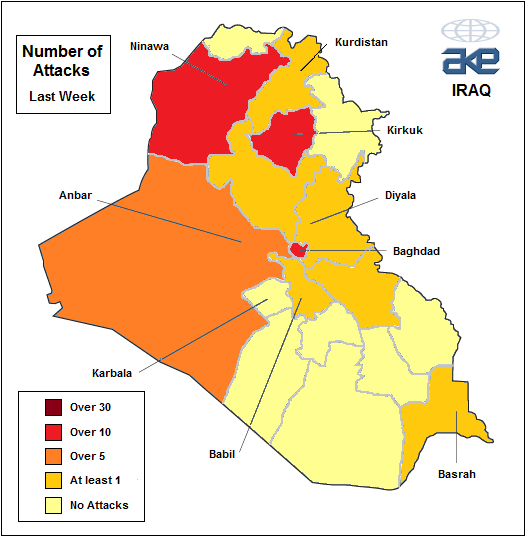 By JohnDrake on 1st December 2011 in Weekly Security Update

As the US military withdrawal continues, levels of violence rose in Iraq over the past week. Incidents were concentrated in Baghdad, Mosul and Kirkuk, while the southern city of Basrah also saw a bomb attack the day before an international oil and gas conference opened in the city. Otherwise there has been a countrywide rise in the number of small arms attacks, which denotes a rise in targeted assassinations. Security force personnel and ministry employees should therefore be on their guard amid the risk of further such attacks over the coming weeks. Security in general is also being increased for the month of Muharram which is expected to see further attacks against the country's Shi'ah population, particularly those due to travel on pilgrimage to Karbala over the coming days.

North
Levels of violence rose in the provinces of Ninawa and Ta’mim last week, with a series of attacks in both Mosul and Kirkuk. In Kirkuk in particular there are concerns that the withdrawal of US forces, who played a strong mediating role amongst the local security forces, will lead to a rise in social tensions at a community and security force level. Meanwhile Turkish military forces continue their cross border operations in the Qandil Mountains. Fighting is continuing despite the onset of winter weather conditions, but the frequency of operations is likely to go into decline over the coming weeks. 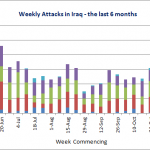 Centre
On 28 November a suicide bomber driving a car filled with explosives attacked a prison building in Taji. At least 19 people were killed and 24 injured in the blast, which is believed to have been aimed at releasing several of the inmates. A large number of suspected Ba'athists are being held in the jail after a series of arrests in Salah ad-Din province, a subject which remains highly emotive amongst residents of the central region. On the same day as the Taji attack a blast took place in the International/Green Zone (IZ) in Baghdad. Initially thought to have been a mortar attack there is mounting evidence that the incident involved a suicide bomber driving a car laden with explosives. The investigation is ongoing but if so, this would be the first bombing in the IZ since April 2007 and will raise questions over the ability of the Iraqi security forces to protect the country after the US military withdrawal. AKE maintains that there are no grounds for complacency amongst those living and working in the IZ. It is also worth noting that several districts in the so-called ‘Red Zone’ see far fewer incidents of violence, and the IZ should not be regarded as the only area where foreign organisations can base themselves in the city. Numerous firms, bodies and NGOs continue to report positive experiences from living and working beyond the blast walls of the city centre.

South
While most of the southern provinces remained quiet last week, terrorists attacked a busy marketplace in Basrah, the day before an international oil and gas conference began in the city, killing and injuring several people, including a large number of police officers. With major oil companies pulling their employees back from the conference at the last minute because of the bombings the terrorists may have been trying to send a signal to the international community and would-be investors that the US military is leaving Iraq in a state of instability. However, the conference was still well-attended and busier than the 2010 event. Despite ongoing uncertainty over the security environment in the country there are still numerous companies keen to participate in the development of what could be considered one of the world’s most exciting emerging markets. Security should be regarded as a manageable obstacle to business, not an inhibitor to investment. Companies willing to tackle the issue of risk rather than avoid the country altogether will find it an extremely lucrative market that remains far from saturated.

John Drake is a senior risk consultant with AKE, a British risk mitigation firm working in Iraq since 2003. You can access AKE’s intelligence website Global Intake here, and you can obtain a free trial of AKE’s Iraq intelligence reports here.