On October 11, 2012, Ambassador Robert Stephen Beecroft (pictured) arrived in Baghdad and was sworn in as U.S. Ambassador to the Republic of Iraq in a ceremony at the Embassy of the United States of America.

He will present his credentials to the Ministry of Foreign Affairs and President Talabani at the earliest opportunity.

Ambassador Beecroft, a career member of the Senior Foreign Service, was confirmed by the U.S. Senate as Ambassador to Iraq on September 22, 2012.

He first arrived at Embassy Baghdad as Deputy Chief of Mission on July 14, 2011. Prior to his service in Iraq, Mr. Beecroft served as Ambassador to the Hashemite Kingdom of Jordan. 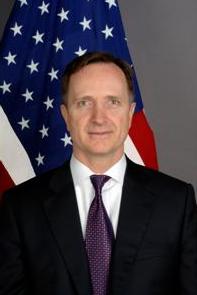