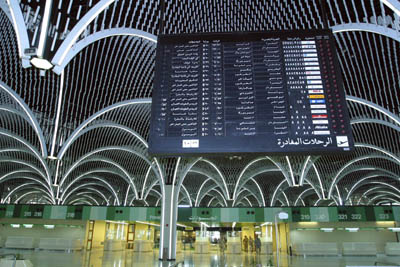 By Editor on 2nd April 2013 in Iraq Transportation News

In light of Iraq’s complicated political and security climate, even the most optimistic could not expect Baghdad International Airport (pictured) to have 125 flights — even including both arrivals and departures — in a single day.

The Iraqi Civil Aviation Authority ranks Baghdad International Airport as the largest airport in Iraq. It registered 125 flights on March 20, probably the highest number of daily flights in the history of this airport, which suffers from major problems in terms of infrastructure, equipment and services.

Iraq witnessed a series of attacks this month amid a severe political crisis between the Shiite-led government and Sunnis and Kurds who demand a greater role in the government.

In 2006, at the height of the civil war in Iraq, Baghdad airport had more than four flights per day. Yet those currently in charge of the airport expect a significant increase in aircraft movement in the next few months, as part of a plan to advance commercial aviation and maximize its revenues in a country where 92% of the annual budget relies on oil money.

Commercial aviation in Iraq has witnessed significant improvements over the past two years, after relative security stability was achieved in the country.

Iraqi Airways, the national carrier of Iraq, seeks to start flights to new destinations, while Baghdad itself is becoming a popular destination.

This month, the first Iraqi Airways flight took off from Britain and landed in the Sulaymaniyah International Airport in the Kurdistan region of Iraq, after the route had been suspended for 23 years.