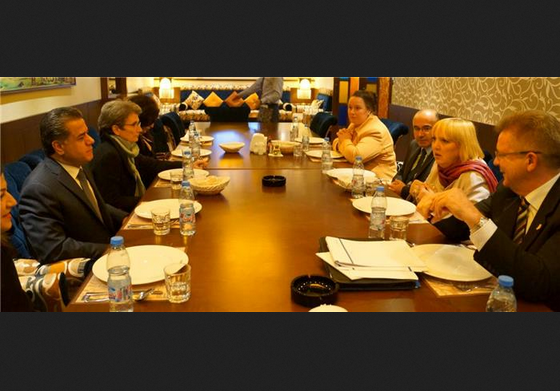 By Editor on 29th January 2014 in Iraq Industry & Trade News

Claudia Roth, who is the Vice-President of the German Bundestag as well as a member of Germany’s Green Party, met with the Head of the KRG Department of Foreign Relations (DFR), Minister Falah Mustafa to discuss areas of mutual concern and bilateral relations.

The Ambassador of the Federal Republic of Germany, Brita Wagener, the German Consul General, Alfred Simms-Protz, and the Assistant Head of the DFR, Siham Jabali also attended the meeting.

Minister Mustafa welcomed Vice-President Roth to the Kurdistan Region and congratulated her on her recent appointment as the Vice-President of the German Bundestag. He briefed her and the accompanying delegation on the situation in the region, the complexity of the Syria crisis, the recent developments in Iraq, as well as strengthening bilateral relations with the Federal Republic of Germany.

In regards to the Syrian refugee crisis, Ms Roth was impressed by KRG’s level of cooperation and commitment to the large influx of Syrian refugees crossing the border into the Kurdistan Region, and thanked the people and the government of Kurdistan for their response.

Minister Mustafa expressed the KRG’s appreciation for the German Government’s response and efforts in alleviating the suffering of the refugees and urged for further assistance from the international community given that the number of refugees is expected to rise.