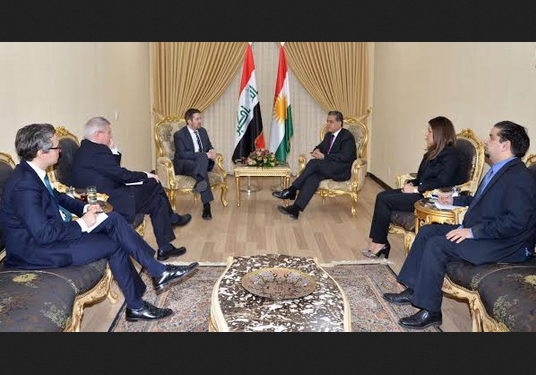 By Editor on 12th February 2014 in Iraq Industry & Trade News

The Head of the KRG Department of Foreign Relations, Minister Falah Mustafa, has welcomed the British Consul General in Erbil, Mr Hugh Evans, who was accompanied by Mr Angus McKee, the Head of the Syria Office at the British Embassy in Lebanon.

The meeting focused primarily on the latest political and security situation developments in Syria as well as bilateral issues.

The meeting, which was attended by Ms Siham Jabali - Assistant Head of DFR, focused on the recent political attempts to finding a solution to help bring an end to the Syrian crisis.

Mr McKee discussed the current crisis in Syria and briefed Minister Mustafa on the latest rounds of political talks in Geneva and the position of the UK government. Both sides highlighted the importance of the Kurdish representation within the opposition during those meetings.

Minister Mustafa reiterated the KRG’s position that since there seems to be no military solution to the conflict, the focus has to be on a political settlement. He also expressed his hopes that the KRG would be involved in the Geneva II talks given the KRG’s political and geographic importance in relation to Syria.

The British Consul and Minister Mustafa spoke about a number of bilateral issues including the allotment of land to the British government to build a fully fledged consulate which Mr Evans said, ‘highlight our plans for a permanent presence here.’ Next month will also see the opening of Standard Chartered’s first branch in Kurdistan.

Both sides also discussed the latest political and security developments in Iraq, as well as the latest regarding the formation of the 8th KRG cabinet.