According to casualty figures released today by UNAMI, a total of 703 Iraqis were killed and another 1,381 were injured in acts of terrorism and violence in February*.

“The political, social and religious leaders of Iraq have an urgent responsibility to come together in the face of the terrorist threat that the country is facing. Only by working together can Iraqis address the causes of violence and build a democratic society in which rule of law is observed and human rights are protected”, the Special Representative of the United Nations Secretary-General for Iraq (SRSG), Mr. Nickolay Mladenov said. 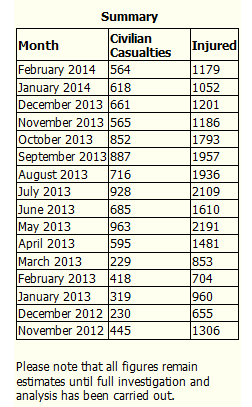 According to information obtained by UNAMI from the Health Committee of the Provincial Council of Anbar, the total civilian casualties in Anbar in February was 298 killed and 1198 injured, with 189 killed and 550 injured in Ramadi and 109 killed and 648 injured in Fallujah. UNAMI has not been able to independently verify these figures nor account for the status of those killed and injured as civilians.

*Casualty figures for February do NOT include casualties resulting from the ongoing fighting in Anbar, which are extracted separately, UNAMI not being able to independently verify these figures nor account for the status of those killed and injured as civilians.