According to casualty figures released by UNAMI, a total of 592 Iraqis were killed and another 1,234 were injured in acts of terrorism and violence in March.

“With Elections Day getting nearer, I once again stress the need for unity and a holistic approach to violence and terrorist threat in Iraq. The political, social and religious leaders of Iraq have an urgent responsibility to set up a mechanism for dialogue and conflict resolution between various stakeholders”, the Special Representative of the United Nations Secretary-General for Iraq (SRSG), Mr. Nickolay Mladenov said. 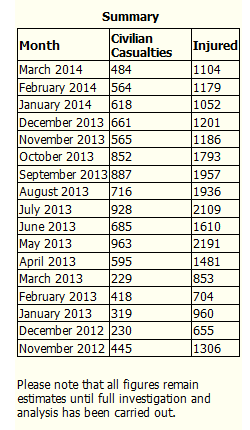 *CAVEATS: Data do not take into account casualties of the current IA operation in Anbar, for which we report at the bottom the figures received by our sources.

According to information obtained by UNAMI from the Health Directorate in Anbar, the total civilian casualties in Anbar up to 30 March were 156 killed and 741 injured, with 80 killed and 448 injured in Ramadi and 76 killed and 293 injured in Fallujah.