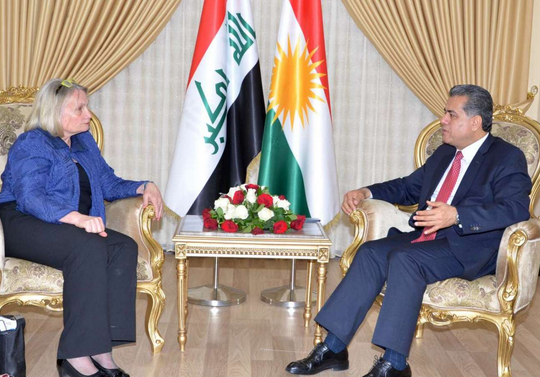 A delegation from the Middle East Institute, an American think tank, visited the Kurdistan Regional Government’s Department of Foreign Relations where they met with the Head of the DFR, Minister Falah Mustafa, and the Assistant Head of the DFR, Siham Jabali.

The delegation, headed by former Ambassador Wendy Chamberlin, discussed their visit to Kurdistan, highlighting the productive meeting with Kurdistan Region President Masoud Barzani. Members of the delegation said this meeting answered a number of questions pertaining to the latest developments in Kurdistan, Iraq and the Middle East generally.

Minister Mustafa welcomed Ambassador Chamberlin and the visiting delegation and discussed Iraq's current status, particularly in relation to the forthcoming parliamentary elections. He expressed his hope that these elections would help bring stability and security to Iraq and help resolve outstanding issues between Erbil and Baghdad.

Issues that have yet to be addressed, despite repeated promises over the years, include the passage of a federal hydrocarbons law and a revenue sharing law, the implementation of genuine power sharing in the federal government and of Article 140, the status of the KRG’s share of the national budget, and the status and budget of the peshmerga regional guard. Minister Mustafa said, “Unfortunately, none of these issues have been addressed and instead Kurdistan is treated as a province rather than as a federal region - despite constitutional stipulations."

After briefing the delegation about the history of the Kurds and the path to democratization which began after the Kurdish uprising of 1991, Minister Mustafa said, "The Kurdish people played a vital role in developing and protecting the 'New Iraq' after the fall of the former regime in 2003. We helped in the difficult task of ensuring security not only in the Kurdistan Region but also elsewhere in Iraq."

The delegation asked Minister Mustafa a number of questions related to the political and economic developments in Kurdistan, the situation and future of Iraq, and relations between Iraq and its neighbors. The minister explained the KRG’s policy of ensuring peaceful relations with all neighbors and non-interference in the internal matters of any other country.

The ongoing Syrian crisis was a major topic of discussion, particularly the grave humanitarian situation and the number of refugees currently sheltered in the Kurdistan Region. Minister Mustafa spoke about the importance of unity among Syrian Kurds, which would provide them with the best opportunity to achieve their objectives and decide their future. He also praised the role of the United Nations and related agencies in caring for refugees, asking the delegation to encourage NGOs to provide further assistance.

Refugee needs range from education to healthcare to sanitation. As there is no clear solution in sight for Syria, foreign governments, international organizations and NGOs will be critical in providing assistance to refugees in the Kurdistan Region.