The following article was published by Reidar Visser, an historian of Iraq educated at the University of Oxford. It is reproduced here with the author’s permission. Any opinions expressed are those of the author, and do not necessarily reflect the views of Iraq Business News.

There have been several rumours flying around regarding the electoral success of the various subunits that form part of the State of Law coalition of Prime Minister Nuri al-Maliki.

Some of these stories suggest parties outside the Daawa movement may potentially pose a significant challenge to Maliki’s authority, something that would form a contrast to the situation in 2010 when Maliki did not face any major competing centres of power internally in his coalition.

The rumour that is easiest to verify – and confirm – relates to the relative success of the Badr organization. Badr, which came into existence in the 1980s as a paramilitary organization sponsored and trained by Iran to fight the Saddam Hussein regime, has won at least 19 seats within the group of parliamentary seats that can be counted as State of Law in the new Iraqi parliament, meaning they make up more than 20% of the State of Law coalition.

Here are Badr deputies in the next Iraqi parliament that can be identified easily, by governorate: 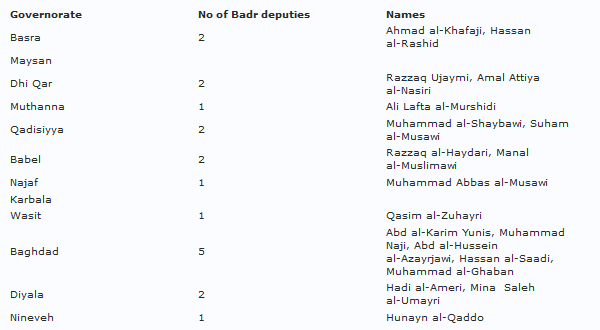 Some of the individual results call for special comment. There are a few prominent vote getters in terms of personal votes, including Hadi al-Ameri with 20,000 in Diyala, though this is really nothing in comparative national perspective.