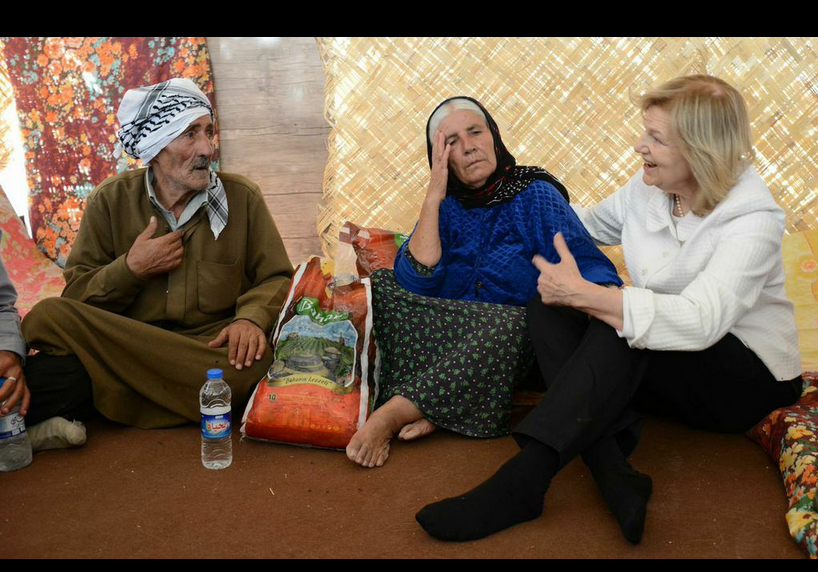 The Chairman of the British-based AMAR International Charitable Foundation, Baroness (Emma) Nicholson of Winterbourne, met the man commanding Peshmerga forces in the Kurdish region of Iraq on Friday and was given a full briefing on the latest situation on the battle against ISIS.

Baroness Nicholson has flown into Erbil to meet AMAR’s medical teams treating some of the many hundreds of thousands of people who have fled the Islamic State controlled areas and are now forced to live in refugee camps.

Dr Rowsch Shaways, who is also Iraq’s acting Deputy Prime Minister, has now taken responsibility for the defence of the Kurdish region and briefed Baroness Nicholson just a few kilometres from the frontline at Khazar – 30km from Erbil.

AMAR is running an emergency appeal both in the UK and in the United States and is providing expert medical care, vital medical equipment, medicines, and blankets, to the displaced families.

Dr Shaways praised the charity for its rapid response to the crisis, adding that the refugees needed as much help as the world could offer.

“This is a terrible situation for these poor people. International organisations such as AMAR are providing a lifeline for them. We are so grateful for their help and for Baroness Nicholson’s many years of support for Iraq and its people,” said Mr Shaways.

He added that the IS forces were very close to the Peshmerga position at Khazar. As the country’s Deputy Prime Minister he believed it was his duty to take command of the Kurdish army and lead the fight against the militants.

During the visit, a Christian family arrived at the Kurdish position exhausted after a hazardous journey from their home which now lies in the IS-controlled part of Iraq.

They told Baroness Nicholson that they had been terrified by the IS who had forced them from their house and stolen all their possessions.

“The grandfather told me that his lifetime’s work building a farm with a 500-strong herd of sheep had been destroyed in a few minutes. The IS took everything. They even snatched the gold cross from around his daughter-in-law’s neck,” said Baroness Nicholson on Friday.

“What this poor family has been through is something I am hearing repeated constantly.   Terrible crimes against humanity are being committed here over and over again. AMAR is doing what it can to help as many people as it can, but we are in desperate need of more funds,” she added.

“We have been working in Iraq for almost 23 years. We have the man and woman power. Skilled local professionals – doctors, nurses, other medical experts – but in order to help as many people as possible we need the resources to carry on helping them for as long as it takes.”

Baroness Nicholson and her team will spend the next few days visiting refugee camps in both the Kurdistan region and also in the Capital, Baghdad, early next week.

For more information or requests to interview Baroness Nicholson or any other members of her team in Iraq, please contact Robert Cole at +44 7768 464864 or [email protected]