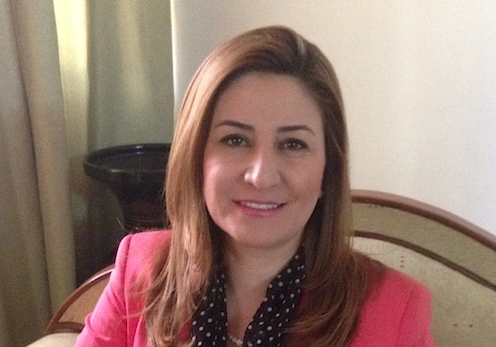 By Editor on 7th October 2014 in Security

RAW in WAR (Reach All Women in WAR) has honoured Vian Dakhil (pictured), a Yazidi member of the Iraqi Parliament, with the 2014 Anna Politkovskaya Award for her courage to speak out and to give a voice to the many Yazidi and Iraqi women and girls whose voices cannot be heard.

Vian Dakhil, the only ethnic Yazidi in the Iraqi Parliament, has bravely drawn attention to the fate of the Yazidi people and, despite being injured in a helicopter crash while delivering aid to survivors on Mt Sinjar, she continues to advocate and to mobilize support for her people, for the refugees and for those trapped in towns and villages under the regime of Islamic State.

“It is a pleasure for anyone to be honored with an award, but it is rare to see a Yazidi person who can feel happy from the bottom of their heart, due to the fact that our girls, women and children are in captivity as hostages of the most dangerous organization in the world.

"I make no secret of the fact that I’m proud to be honored with your esteemed award, but the real way to honor someone is by protecting their freedom and rights. It is by bringing our prisoners back.”

The RAW in WAR Nominations Committee for the 2014 Anna Politkovskaya Award is deeply humbled by Vian Dakhil's courage to become the voice of the Yazidi community and by her determination to campaign for the protection of all Yazidi and other Iraqi women under Islamic State, despite the danger she is facing as a Yazidi woman politician opposed to Islamic State.