By Editor on 3rd November 2014 in Security

According to casualty figures released today by UNAMI, a total of at least 1,273 people were killed and another 2,010 were injured in acts of terrorism and violence in October*.

“I express my deep outrage for the ongoing kidnappings and murders of scores of people from all segments, ethnicities or religions of the Iraqi population, perpetrated by the terrorist ISIL organization, whose bodies are discovered in mass graves”, Mr. Mladenov said.

“Justice and accountability for those responsible for these mass executions, killings, disappearances, and displacement must be ensured”, he continued, urging the government of Iraq to ensure that all persons or groups who commit or have committed such barbaric crimes are brought to justice.

*CAVEATS: Data do not take into account casualties of the current IA operation in Anbar, for which UNAMI was unable to obtain figures for the reporting period.  In general, UNAMI has been hindered in effectively verifying casualties in conflict areas.  In some cases, UNAMI could only partially verify certain incidents.  UNAMI has also received, without being able to verify, reports of large numbers of casualties along with unknown numbers of persons who have died from secondary effects of violence after having fled their homes due to exposure to the elements, lack of water, food, medicines and health care.  For these reasons, the figures reported have to be considered as the absolute minimum.

According to information obtained by UNAMI from the Health Directorate in Anbar, the total civilian casualties in Anbar until 30 October inclusive were 233 killed and 584 injured, with 52 killed and 332 injured in Ramadi and 181 killed and 252 injured in Fallujah. 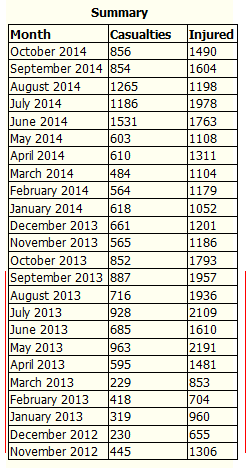