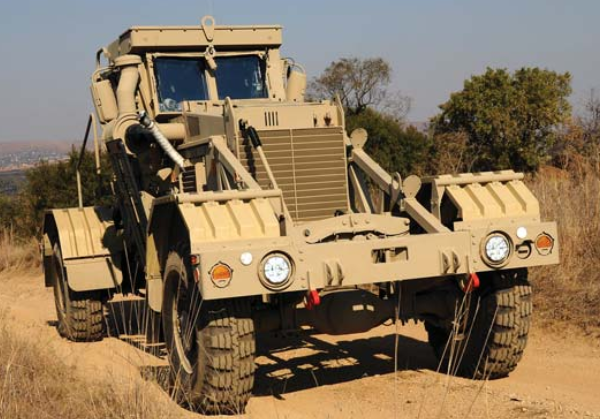 Critical Solutions International (CSI) has announced that the Iraqi Ministry of Defense has purchased the Husky 2G as its Improvised Explosive Device (IED) and mine clearing vehicle.

According to a statement from the company, this procurement represents a critical enhancement to Iraq's route clearance mission and its ability to maintain freedom of maneuver and oppose ISIS and other forces within Iraq.

The Husky 2G is equipped with the FASCAN interrogation arm used to interrogate suspected mines and Improvised Explosive Devices (IEDs). The up-graded Husky 2G is built with additional power and capability to accept future integration of additional sensors and enhancements such as the NIITEK Ground Penetrating Radar.

This contract was awarded to CSI and its partner DCD Protected Mobility, a division of DCD Group (Pty) Ltd, the OEM of the Husky.

In addition to the FASCAN International interrogation arm, the Husky 2G is also equipped with the TORC Robotics 360 Situational Awareness camera system and QinetiQ North Americas QNET, which provides the vehicle with lightweight protection from rocket-propelled grenades (RPGs).

This program is valued at more than $73.5 million [86 billion Iraqi dinars] and will support the Iraqi military in protecting both soldiers and civilians in and around Iraq.

Responding to the need for longer mission duration and enhanced detection capability, the Husky 2G two-operator variant was originally developed and delivered to the U.S. Army. The addition of a second operator allows the Husky driver to focus on vehicle control and situational awareness, while the second operator monitors and analyzes the advanced sensor systems and the operational environment. The U.S. Army recognized this life-saving vehicle design with an Innovation of the Year Award for 2010.

"The Iraqi government has determined that the Husky 2G is essential to defeating their IED and mine threats and represents a significant investment in saving lives and enhancing the capability of the Iraqi military.

"We are honored to have been awarded this contract and are looking forward to working with the Iraqi Ministry of Defense to fully support this program and any future requirements."