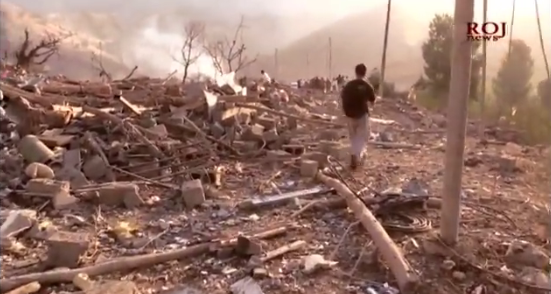 Evidence collected by Amnesty International in a fact-finding mission indicates that multiple Turkish government airstrikes killed eight residents and injured at least eight others – including a child - in a flagrantly unlawful attack on the village of Zergele, in the Kandil Mountains in the Kurdistan Region of Iraq.

The airstrikes on 1 August were part of a military campaign launched by Turkey against the Kurdistan Workers’ Party (PKK) but according to information gathered by Amnesty International these residents were not affiliated with the PKK. The organization is calling on the Turkish government to launch an independent, impartial and effective investigation into the airstrikes and to publicly release the findings of their investigation.

“The recent attacks in Kandil maimed, killed, and displaced residents, destroying homes and terrifying locals in an area where no military targets appeared to be present,” said Lama Fakih, Senior Crisis Advisor at Amnesty International who visited the area.

“The evidence of these casualties raises serious concerns about the lawfulness of the attack in Kandil, and underscores the need for any investigation into the airstrikes to be independent, impartial and to ensure accountability and reparations for victims and their families.”

Whether or not the clashes between the PKK and the Turkish government amount to a non-international armed conflict, under both the laws of war and international human rights law the killing of residents not affiliated with the PKK is unlawful.

The Turkish authorities had initially claimed the strikes were targeting PKK members at a “terrorist camp”. They have since announced plans to conduct a joint investigation into the strikes with the Kurdistan Regional Government of Iraq (KRG).

Evidence gathered during a visit by Amnesty International to the village of Zergele three days after the airstrikes suggests all those killed and injured in the attack were not affiliated with the PKK. Amnesty International spoke to several eyewitnesses, including two doctors who rescued the wounded and three residents who consistently said that none of the dead or injured were PKK fighters and that there were no PKK fighters in the area. Those killed included a local mayor and two municipality workers.

All the witnesses who were present at the time of the attack or arrived there shortly afterwards said that the victims wore civilian clothes and that they saw no weapons on the scene. Amnesty International reviewed 10 photographs and one video from the scene that were consistent with these witness statements.