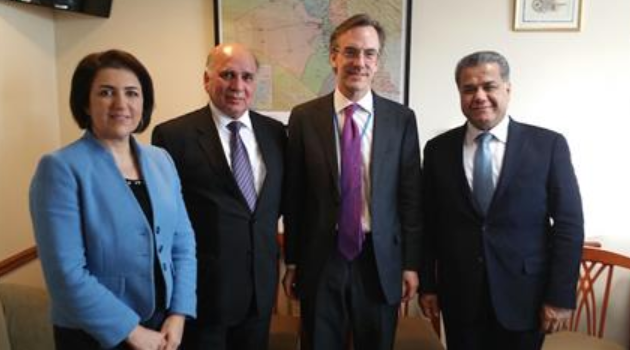 By Editor on 17th January 2016 in Politics, Security

Kurdistan Regional Government (KRG) officials contiued their visit to Washington this week with meetings with Administration and defense officials, as well as senators and media organizations.

The visit comes as falling oil prices, the responsibility of 1.8 million displaced people, and the ongoing war against ISIS have put tremendous financial strain on the KRG and the people of Kurdistan.

Dr Fuad Hussein, Chief of Staff to the President of the Kurdistan Region, Minister Falah Mustafa Bakir, Head of the KRG Department of Foreign Relations, and KRG Representative to the United States Bayan Sami Abdul Rahman visited General Lloyd Austin, Commander of US Central Command, on Wednesday. Through several productive meetings, the delegation discussed the US and Coalition’s critical role in supporting, training, and equipping the Peshmerga Forces.

At the US Department of State on Thursday, the delegation discussed the complex of economic, humanitarian, and security challenges facing the Kurdistan Region with a number of senior officials.

In a meeting with Assistant Secretary Tom Malinowski, Ambassador-at-Large for International Religious Freedom David N. Saperstein, and Director of Office of Global Criminal Justice Todd Buchwald the KRG officials gave an update on the status of religious and ethnic minorities in the Kurdistan Region. They asked for support for the reconstruction of Sinjar and the recognition of the crimes committed by ISIS as genocide.