As Iraqi military forces clear the key city of Ramadi after retaking it from Islamic State of Iraq and the Levant control, thousands of terrorist explosives left behind have complicated the process, a spokesman for Combined Joint Task Force Operation Inherent Resolve told Pentagon reporters today.

Delivering an operational update by live satellite feed from Baghdad, Army Col. Steve Warren (pictured) said that while clearing the city is progressing, it’s “slow and it's painstaking.”

Another issue is that Iraqi forces are finding a “large number of civilians” who likely have hidden from ISIL or are escaping from enemy control, he said.

“[Iraqi forces] have cleared a majority of the downtown city center and are now pushing east and north into the Sufia district, which is a suburb of Ramadi,” Warren said, adding that as areas are cleared, the Iraqi security forces turns them over to local Iraqi police.

In western Anbar province, several gunfights in the past few days followed last week's rout of ISIL near Barwanah, where coalition forces struck several targets including tunnels and two factories: one for vehicle bombs and the other for IEDs, Warren added.

Additionally, coalition forces have conducted 47 airstrikes in Mosul since Jan. 13, including one on an ISIL cash-collection point, Warren said. “This was the second strike in Mosul in as many weeks against ISIL financial targets,” he added. “We've previously struck eight other cash storage and distribution areas across Iraq and Syria.”

Costs of the Anti-ISIL Campaign

In both Iraq and Syria, the total cost of operations to defeat ISIL has reached $5.5 billion and is running at $11 million per day, Warren said. It’s estimated coalition airstrikes have killed several thousand enemy fighters, and Iraqi forces have helped to rescue more than 3,600 civilians who were trapped by ISIL, he added.

Coalition strikes have killed about 95 senior and mid-level ISIL leaders since the beginning of May, he said, adding that the U.S.-led coalition has provided basic combat training for 16,715 personnel and put thousands more through various specialized training programs.

“This enemy has proven time and again its ruthlessness, its barbarity, its willingness to destroy everything from human life to civilian supporting infrastructure to … cultural artifacts with absolute disregard for history, humanity, or anything that approaches decency,” Warren said. “[This] really is a battle of savagery against decency.” 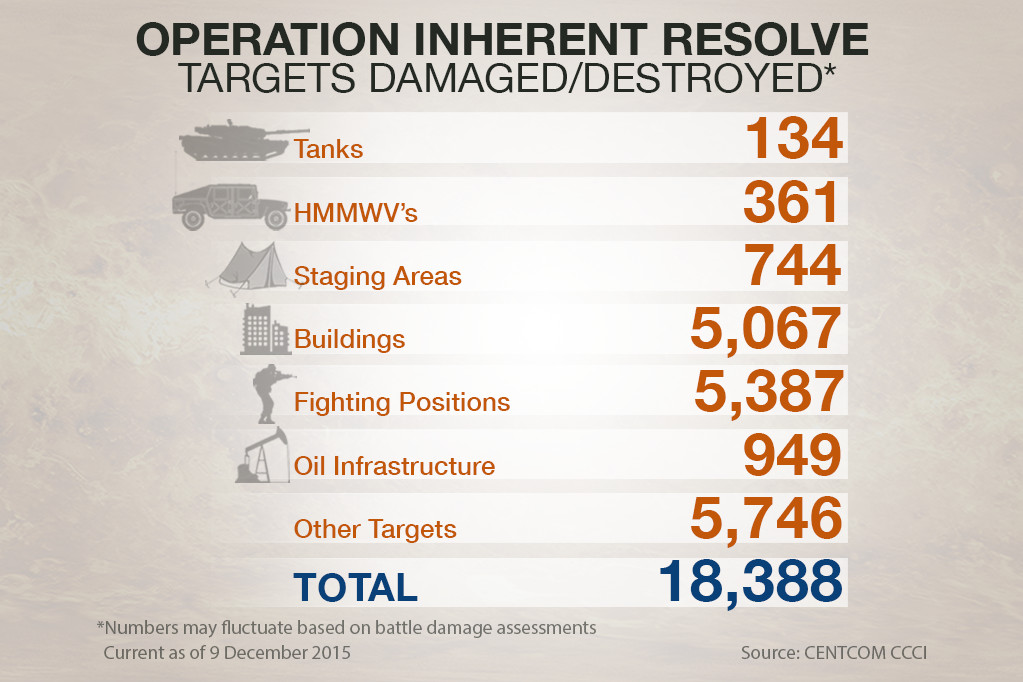