By Editor on 6th February 2016 in Security

Register Now for “IN THEIR SHOES” 5k to Benefit Iraqi Children

It’s that time again!  The Iraqi Children Foundation is hosting its 4th annual “IN THEIR SHOES” 5K to benefit Iraq’s most vulnerable children on Saturday, May 14, 2016, in Old Town Alexandria, VA.

Race course is USATF certified and will be timed.  Not a serious runner?  Join the fun and bring the family for food, music, and fun.

REGISTER NOW TO GET EARLY BIRD RATE!   For a limited time, last year’s rate will be honored at $25 per person, including race shirt, water, and snack; $20 per person for teams or families of 4 or more!

A SPECIAL THANKS TO OUR DISTINGUISHED 5K HONORARY COMMITTEE MEMBERS FOR CHAMPIONING IRAQ’S CHILDREN: 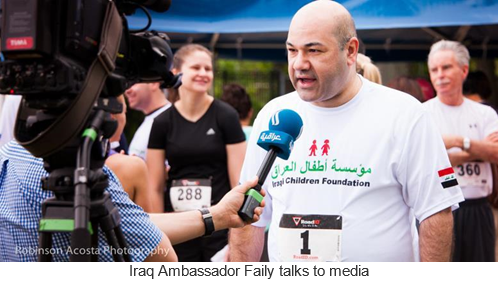