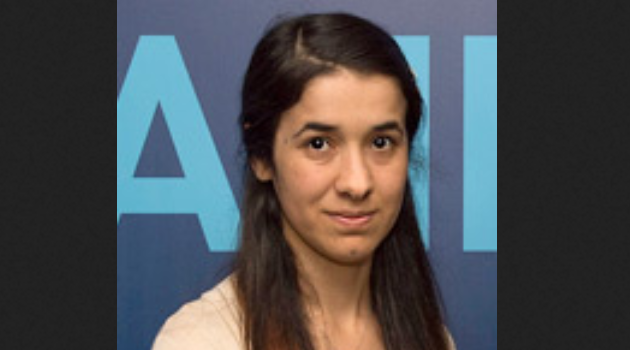 By Editor on 19th September 2016 in Politics, Security

Nobel Peace Prize nominee Nadia Murad Basee Taha - who survived trafficking at the hands of the Islamic State group (IS, ISIL, ISIS, Da'esh) - was formally appointed UNODC (United Nations Office on Drugs and Crime) Goodwill Ambassador for the Dignity of Survivors of Human Trafficking on Friday.

This designation marks the first time a survivor of atrocities is bestowed with this distinction. Ms. Murad, a 23-year-old Yazidi woman, briefed the Security Council in its first-ever session on human trafficking last December.

She described being rounded up with fellow Yazidis in Iraq in 2014 and witnessing ISIL fighters shooting men and boys in cold blood. She was subject to grave abuses at the hands of ISIL fighters and was bought and sold various times.

At the induction ceremony in New York, Secretary-General Ban Ki-moon recognized Nadia's resolve to serve as a voice for the voiceless, noting that:

"Nadia survived horrific crimes. I cried when I heard her story. But I didn't only cry out of sadness. I was also moved to tears because Nadia has so much strength, courage, and dignity. She rightly calls for a world where all children live in peace."

"Nadia's appointment as a UNODC Goodwill Ambassador, provides a unique opportunity to urge others to join us in our fight against human trafficking. We know that Nadia's extraordinary commitment to the plight of trafficking victims will move people to take action against this scourge."

Since her Security Council briefing Ms. Murad has met with various Heads of State and global leaders to raise the plight of Yazidi victims of trafficking and other crimes committed by ISIL.

Ms. Murad also previously spoke at a special UNODC-US event at the World Humanitarian Summit in Istanbul Turkey earlier this year on the issue of human trafficking in the context of humanitarian situations. Furthermore, she was recently named one of Time Magazine's "100 Most Influential People of 2016".

As UNODC Goodwill Ambassador for the Dignity of Survivors of Human Trafficking, Nadia's main goals is to focus on advocacy initiatives and to raise awareness around the plight of millions of victims of trafficking, especially refugees, women, and girls. She has also been asked to speak at the opening of the United Nations Summit for Refugees and Migrants to be held on 19 September.