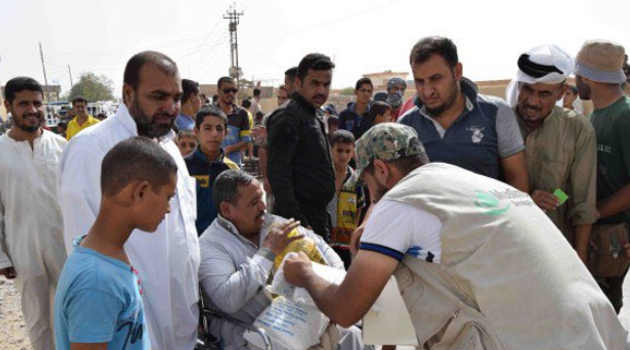 For the first time in more than two years, the United Nations food relief agency has distributed urgently-needed food for people in and around the northern Iraqi town of Shirqat, which was under siege and cut off from humanitarian access from 2014 until earlier this month.

“Families in Shirqat are in a desperate need of humanitarian support after being cut off from the outside world for more than two years,” said Sally Haydock, Country Director in Iraq for the UN World Food Programme (WFP), in a news release.

“Thanks to a major contribution from USAID's Food for Peace and Office of Foreign Disaster Assistance, WFP will be able to continue providing support for newly displaced families from the larger Mosul area,” she said.

WFP distributed a one-month supply of food for families in the Khadhraniya area of Shirqat through its local partner, Muslim Aid.

Residents of Shirqat – which is located 80 kilometres south of Mosul – have been living under very harsh conditions, struggling to access water, food, medical services and a functioning local market. WFP distributed rice, lentils, wheat flour, bulgur wheat, beans and vegetable oil for an initial 1,000 people. The agency plans to monitor the situation and support people in the town and surrounding villages over the coming weeks.

“This latest contribution of $25 million to WFP continues and reinforces our support to displaced and conflict-affected Iraqis,” said Douglas Silliman, United States Ambassador to the Republic of Iraq.

Mr. Silliman noted that since 2014, the United States, through the Office of Food for Peace of the United States Agency for International Development (USAID), has provided more than $113 million in life-saving emergency food assistance to the people of Iraq.

More than three million Iraqis have been displaced by conflict since mid-June 2014. In response, WFP has provided food assistance to more than one million vulnerable, displaced Iraqis across all 18 governorates.

WFP is scaling up its assistance to support people displaced from Mosul and surrounding areas in Iraq as part of an inter-agency humanitarian response. To continue assisting displaced families in Iraq until the end of the year, WFP said it urgently requires $68 million.