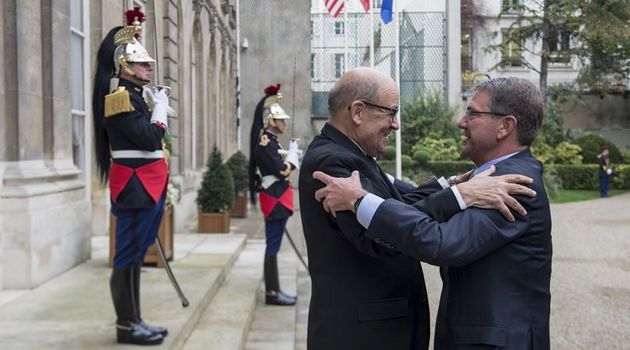 The contributions of coalition partners in the fight against the Islamic State of Iraq and the Levant are invaluable, Defense Secretary Ash Carter said today at the opening of the counter-ISIL small group defense ministerial at Hexagone Balard, the new French defense ministry building in Paris.

The secretary, in prepared remarks, said the coalition defense ministers’ attendance at the ministerial is vital to the U.S.-led coalition’s campaign to deliver ISIL a lasting defeat.

“In a few weeks, everyone here in France and around the world will mark the anniversary of the 13 November Paris attacks,” Carter said. “In the year since, the French people have stood resolute in the face of terror. And the United States is proud to stand with France, …  and I know each member of this coalition feels the same.”

The secretary told the ministerial members tomorrow marks another important anniversary. “A year ago, President [Barack] Obama approved the first in a series of decisions to begin accelerating our campaign against ISIL,” he said.

In a news conference with French Defense Minister Jean-Yves Le Drian following the talks, Carter said he and Le Drian an "excellent" meeting with 11 of their counterparts. The purpose of the conference, he said, was fourfold:

Mosul Operation According To Plan

Carter, who visited Iraq last weekend, said he is encouraged to see the counter-ISIL campaign “proceeding according to the plan we laid out." Iraqi forces, he said, are fighting with skill, commitment and courage.