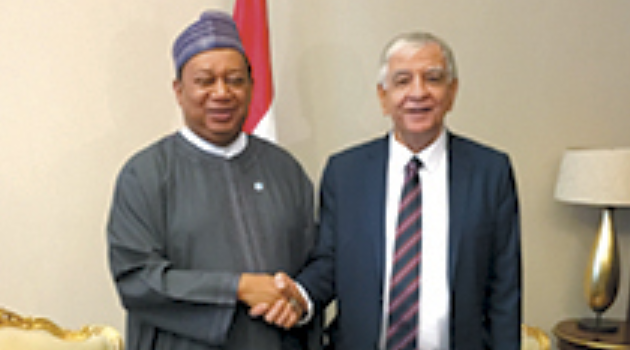 The Iraqi Minister for Oil has committed to support the efforts of the Organization of the Petroleum Exporting Countries (OPEC) aimed at stabilization of the oil market.

“Your visit comes at a time when Iraq is working hard to develop its oil industry, while at the same time fighting terrorism and achieving victories against ISIS in Mosul and other places in Iraq.”

HE Al-Luiebi also reiterated Iraq’s support to OPEC in the current oil market environment. He pledged that Iraq would continue to back the OPEC Secretariat and work together with Member Countries, as well as non-OPEC countries, to help stabilize and bring balance to the oil market.

Thanking HE Al-Luiebi for his welcome, HE Mohammad Barkindo expressed his happiness to visit Iraq, the birth place of the OPEC and the cradle of ancient civilizations. He stated that Iraq has played, and continues to play an important role alongside other Member Countries in helping achieve the stability that all producers, as well as consumers, desire.

In speaking about the current oil market, HE Mohammad Barkindo said that between June 2014 and January 2016 the OPEC Reference Basket price fell by 80%. It is, he added, the largest percentage fall in the six cycles of sharp price declines that have been observed over the past three decades.

HE Mohammad Barkindo also stressed that it was important to recognize that the current oil cycle has led to a dramatic drop off in oil market investments. He said that global exploration and production spending fell by around 26% in 2015 and a further 22% drop is anticipated this year, which overall equates to over $300 billion.

Later in the day, HE Barkindo met with the leader of the National Alliance, the largest Iraqi parliamentary bloc, and head of the Islamic Supreme Council of Iraq (ISCI) Ammar Al-Hakim.

The Secretary General will hold further talks with Prime Minister of Iraq, Dr. Haider Al-Abadi, on Wednesday and pay a courtesy call on the President of Iraq, Dr. Fuad Masum.

Secretary General Barkindo is expected to visit Kuwait and the United Arab Emirates early November in continuation of the extensive consultations post Algiers Accord.