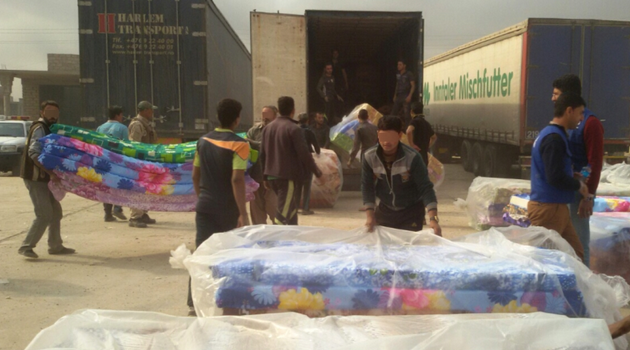 Joint Statement on One Month of Military Operations to Retake Mosul

Today marks one month of intensified military operations to retake the city of Mosul. With tens of thousands of families in newly retaken areas urgently requiring life-saving assistance, the humanitarian community in Iraq faces a massive scope of need.

These latest developments further exacerbate a humanitarian crisis in a country where 10 million people already were in need of aid.

In many newly retaken areas, civilian infrastructure such as water and power plants, schools and hospitals are damaged and medical services often unavailable. Families go hungry due to lost livelihoods, disrupted food production and supply, and increased food prices at markets.

Water supply for drinking and agricultural production has been damaged, as has agricultural equipment. Many families are forced to drink untreated water from wells; their children are unvaccinated, without formal education and many are in high need of psychosocial support.

Heavy contamination of newly retaken areas with improvised mines and scorched earth tactics employed by members of the armed group controlling Mosul pose immediate and long-term risks for the people and the environment.

“Wherever we can, humanitarian partners are helping displaced people and vulnerable families in newly retaken communities,” said Ms. Lise Grande, the Humanitarian Coordinator for Iraq, in the name of the humanitarian community. “We are working as quickly as we can and in close coordination with Iraqi authorities to help some of the most at-risk people in the world.”

Nearly 59,000 people have been displaced, about 26,000 of them children. In support of the Government of Iraq, the United Nations and non-governmental organizations (NGOs) have begun to provide assistance to displaced and resident families in newly retaken areas.

More than 40,000 displaced people have found shelter in formal camps in three governorates prepared and managed by the Government, the United Nations and national and international NGOs. More than half of the displaced people are women, girls, and female headed households who often are survivors of sexual and other human rights abuses.

Over 6,700 women and girls have received reproductive health consultations, including life-saving assisted deliveries. Some 1,400 sessions have been held to reach survivors of gender based violence. Shelter capacity and services in existing camps are being expanded and improved, and new emergency sites built.

The United Nations and NGOs are grateful for the support they have received from donors but urgently need additional resources to support the tens of thousands of families who need help. With winter approaching, and temperatures dramatically dropping at night, families, many who fled their homes with virtually nothing, need heaters, blankets and other winter items.

More than 100 humanitarian partners are currently assisting people affected by the ongoing military operations according to the humanitarian principles of humanity, neutrality, impartiality and independence.

With military operations imminent in densely-populated sections of Mosul city, humanitarians are increasingly worried about the ability of families impacted by the conflict to reach safety and assistance.

In a worst case scenario, as many as one million people could be at extreme risk from cross-fire, snipers, contamination with improvised explosive devices, forced expulsions and could be used as human shields. Civilian casualties, and the lack of capacity to treat these, are deeply worrying.

The humanitarian community in Iraq is profoundly concerned about the plight of civilians, and again, at the end of the first month of the Mosul campaign, calls on all parties to the conflict to do their utmost to protect the rights and lives of civilians and uphold their obligations under international humanitarian law.