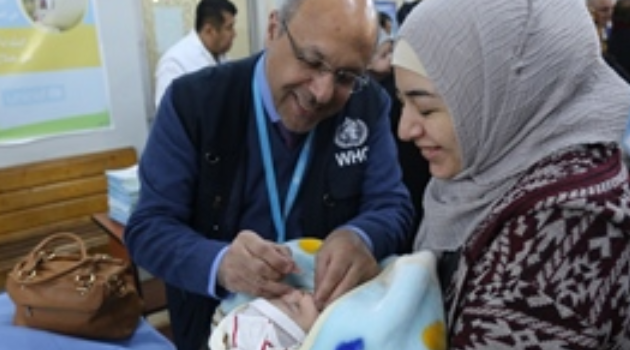 By Editor on 25th January 2017 in Healthcare

A national immunization days campaign has today commenced in Iraq and targets over 6 million children aged 0 to 5 years of age.

The campaign is aimed at increasing the immunity of children and sustaining polio free status in Iraq; an achievement of the Ministry of Health authorities. The campaign will also ensure a wider reach of children who might have been missed during routine vaccinations and other campaigns.

Since April 2014, Iraq has been polio free. WHO and its health partners are working with the Iraq Ministry of Health of Iraq to maintain this great achievement of a polio free status.

During this campaign, WHO will be conducting support supervision visits to ensure quality campaigns and reach of all the children. WHO has supported health authorities with micro-planning, implementation, supervision, and intra and post-campaign monitoring among high-risk groups such as internally displaced persons and people living in areas with limited access.

More than 26 000 mobile teams are supporting the campaign, of these 2242 are in the Kurdistan Region. This is the first vaccination campaign in 2017; the Ministry of Health, in collaboration with WHO and UNICEF, plans to conduct another national polio immunization campaign in March 2017.

In 2016, 3 high quality national polio campaigns were conducted in Iraq with an average coverage of more than 90% according to an independent monitoring survey implemented by WHO through Iraq Red Crescent Society.

One additional round was also conducted for the displaced people and host communities as a result of the Ninewa operations in December 2016 during which more than 700 000 children were vaccinated in Ninewa, Anbar, Salaheddin, Kirkuk, Erbil and Duhuk.