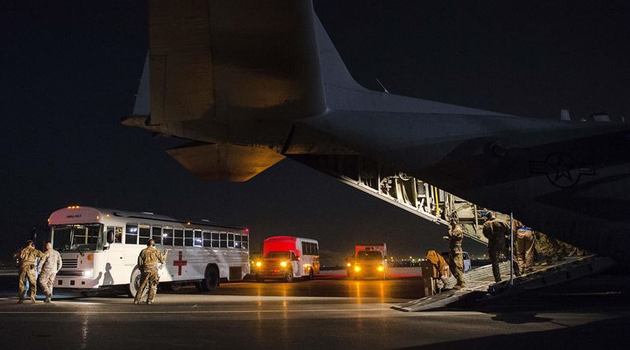 Partnered forces in Syria and Iraq are continuing to make progress in defeating the Islamic State of Iraq and Syria, a Pentagon spokesman said today.

Syrian Democratic Forces yesterday cleared more than 130 kilometers of terrain in the Raqqa valley and in the vicinity of Tabqa, Navy Capt. Jeff Davis told reporters.

The SDF is closing in on Raqqa, he said, pointing out that in the northern Raqqa valley, the SDF has cleared to within four kilometers of Raqqa.

Davis noted pro-regime forces are conducting patrols west and north of At Tanf, in the vicinity of the deconfliction zone where the United States is working with partners.

"The coalition dropped leaflets over the weekend demanding that the pro-regime troops withdraw from this deconfliction zone," he said.

The coalition continued strikes against ISIS targets in Raqqa over the weekend, to include ISIS tactical units, vehicles, a tunnel, a mortar system, a weapons cache, a vehicle-borne improvised explosive device factory and a fighting position, Davis said.

Iraqi forces have surrounded the old city in west Mosul, Davis said, noting today is the 100th day in the campaign to liberate west Mosul.

Iraqi security forces made small gains along the forward line of troops yesterday, bringing to 577 square kilometers the gains since the west Mosul offensive began Feb. 19, he said.

"They continue to slowly advance against heavy resistance in the last few ISIS-held neighborhoods," Davis explained.

In the campaign for west Mosul, coalition forces continue to support and conduct strikes on enemy positions and potential vehicle-borne improvised explosive devices, striking about 85 vehicles in the last two days inside west Mosul to protect partnered forces, Davis pointed out.