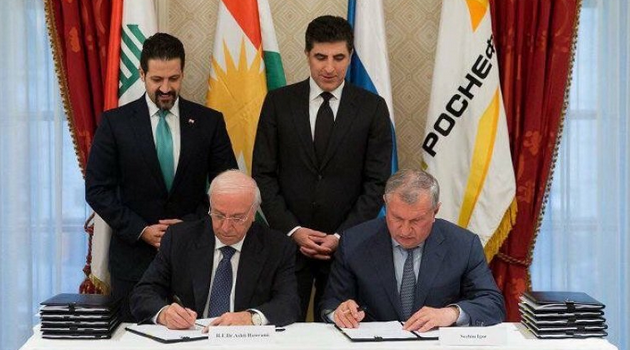 Russia's Rosneft and the Kurdistan Regional Government (KRG), as part of the XXI St. Petersburg International Economic Forum, signed a series of agreements on widening their cooperation in exploration and production of hydrocarbons, commerce and logistics.

The documents were signed ahead of the meeting between the President of the Russian Federation Vladimir Putin and the Prime Minister of Iraqi Kurdistan Nechirvan Barzani by Igor Sechin, Rosneft Chief Executive Officer, and Dr. Ashti Hawrami, Minister of Natural Resource.

The Parties signed an investment agreement under which they committed to develop cooperation in exploration and production, agreed on monetization of the export oil pipeline in Iraqi Kurdistan, as well as entered into a number of production sharing agreements.

The agreement outlines the main terms of the project which provides for the establishment of a joint venture for implementation of the long-term contract related to infrastructure systems in Iraqi Kurdistan. Rosneft will get access to the major regional transportation system with the throughput capacity of 700 thousand bbl per day, which is planned to be expanded up to 1 mln bbl per day by the end of 2017.

Also, the Parties committed to enter into effect of the PSAs signed as part of the Forum with respect to five blocks with substantial geological potential and outlines other perspective areas of cooperation in exploration and production, including the gas sphere.