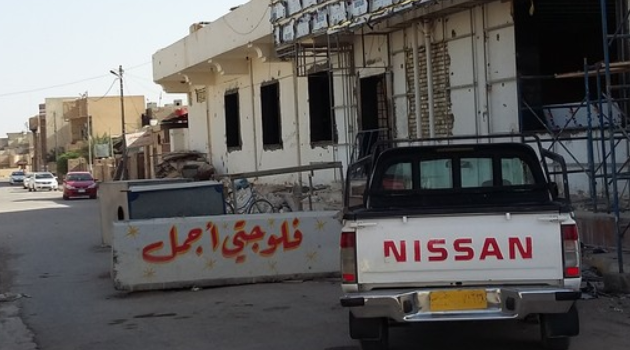 By Editor on 15th June 2017 in Construction & Engineering In Iraq

Locals In Anbar Take Reconstruction And Security Into Their Own Hands

Sick of waiting for promised aid, locals in Anbar are doing their best to reconstruct their own lives - and even starting their own neighbourhood watch against extremists.

There is plenty to be concerned about when it comes to the reconstruction of Anbar province, an area that has suffered much destruction due to the security crisis caused by the extremist Islamic State group.

Whole towns still lie in ruins and rubble and, in some areas, not even the decomposing corpses of former IS fighters have been removed. There are checkpoints and armed men everywhere, explosives remain hidden underneath destroyed buildings, displaced families or families suspected of being involved with the IS group have fled and are living in the desert and there is always the ongoing threat that the extremists might return and launch further attacks. Locals are just waiting to see whether all the talk of reconstruction amounts to anything.

But at the same time, they have started trying to bring life back to the destroyed cities themselves. The fact that a reported 80 percent of local students have been able to return to school makes people here happy: Seeing them walking the streets on their way to class is a joy. The schools have reopened thanks to international and local aid projects.

Hakim Naji, a resident of the Shuhada area on the outskirts of Fallujah, has recently returned home to his job at a local school. Soon he will be supervising exams there and, he says, it’s the first time he has been back to the institute for three years. He finds it very painful and says he is particularly shocked at the pupils’ behaviour after several years of the security crisis.

“The coming days and months are going to be difficult,” he concedes. “People here, and educational institutions, will need to invest huge efforts to bring people back to the right path – especially the younger people, who are the future of our society.”

Anbar’s people are not waiting for humanitarian aid or government donations – many of them are doing their best to bring life back to their hometowns. Watching returned families busy trying to renovate and rebuild their own properties is also reason for optimism.

People are trying to adapt, says Ammar al-Ulwani, a greengrocer from the Jamiyah neighbourhood in Ramadi; he himself has managed to fix his house up and even re-open his business selling vegetables. “We are trying to live a normal life. We are trying to overcome our difficulties – but life is far from normal yet. We must continue to face these challenges. Because you don’t just stop living.”

One thing that local residents are concerned about when it comes to reconstruction is the discrimination between different neighbourhoods. If there is a government official, a tribal leader, or a member of one of the influential political parties living in a certain neighbourhood, that place always seems to be serviced first. The important people living in those areas advocate for what they see as their electorate, critics say.

According to some tribal leaders, tribal disputes and wrangling for more power or wealth in Anbar, don’t help either. The city of Ramadi and towns of Heet and Baghdadi are particularly afflicted by this and the infighting is apparently contributing to further deterioration in services, lack of reconstruction and a potential security issue that could see the IS group gain control over the divided tribes.

Security and stability are really the main concern of most of Anbar’s ordinary people though. They do not want to lose anything that has been gained at such a high price, to the extremists. In many ways, they are taking this problem into their own hands. Locals in the southern neighbourhoods of Ramadi said that everyone is more cautious these days and that people feel more of a sense of personal responsibility for their own security. They cooperate with security forces and notify them of anything that could be associated with terrorism, they said.

For example, Abdul Hamid al-Faraji, a resident of the Tamim neighbourhood in Ramadi, says he checks who enters and exits his neighbourhood daily. Other than that, he notes, he’s living an ordinary life.

“Most people here have an increased sense of the need to maintain security in order to prevent the city from falling into the hands of strangers again,” al-Faraji said, adding that the local security forces know he keeps an eye on the streets and are happy for him to do this. “We also believe that some in the security forces may still be affiliated with the terrorists. Now we are doing what we think is best for us,” he concludes.