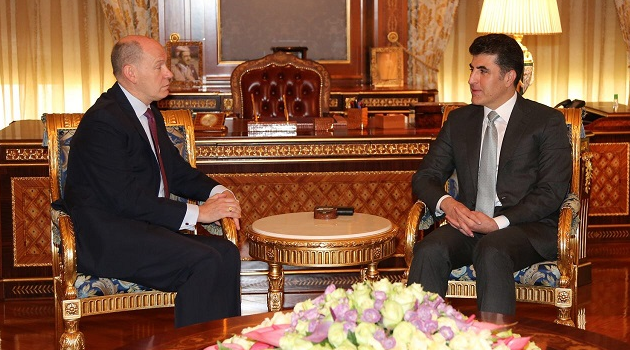 Consul General Warr commended the role of the Peshmerga forces in the fight against ISIS and the Kurdistan Region for hosting large numbers of internally displaced people, who fled ISIS atrocities and took refuge in Kurdistan.

He reiterated United Kingdom’s support for the Kurdistan Region, particularly in the military sector.

Prime Minister Barzani wished the new Consul General success in his new position and assured him of KRG’s full support.

He expressed his government’s appreciation for UK’s military and humanitarian support to the Kurdistan Region and voiced the need to further strengthen bilateral relations.

Prime Minister Barzani briefed Mr. Warr about the economic situation in Kurdistan, noting that British companies are welcome to invest in Kurdistan Region and make the Region a focal point for British projects across Iraq.

Regarding the relations between KRG and Iraqi Federal Government, he stressed the need to resolve the outstanding issues through serious dialogue and mutual understanding, in which, he said, the United Kingdom can play a positive role.

The war against terrorism and regional political developments were also discussed in the meeting.