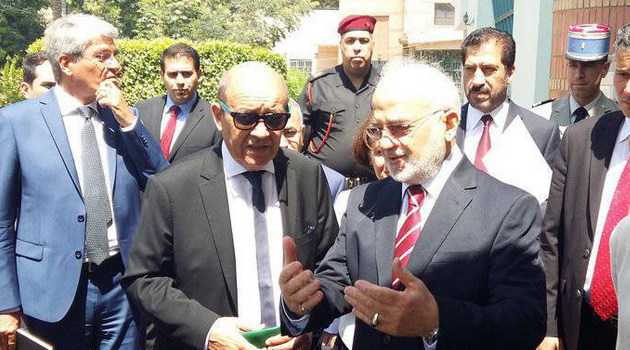 Mr Jean-Yves Le Drian met with the President of the Republic of Iraq, Mr Fuad Masum, the Prime Minister, Haider al-Abadi, and his Iraqi counterpart, Mr Ibrahim al-Jaafari. He also met with Kurdish authorities, including the President of the Kurdistan Regional Government, Mr Masoud Barzani.

The victory of Iraqi forces in Mosul represents a decisive blow to Daesh’s territorial claims, and the group’s grasp on Iraqi territory continues to weaken. This battle was launched in October 2016 with the French army providing support to the Iraqi forces whose bravery is commended by Mr Jean-Yves Le Drian.

The fight against Daesh must continue in order to liberate the areas of Iraq still under occupation, notably Tal Afar, Hawija and the Anbar province. Mr Jean-Yves Le Drian provided reassurance of France’s constant commitment alongside the Iraq to defeat the terrorist organization and also stressed the need to protect civilians.

France will support the stabilization and reconstruction of Iraq to achieve sustainable peace which reconciles all parts of Iraqi society. It is with this goal in mind that Mr Jean-Yves Le Drian confirmed the attribution of a loan of €430 million [$515 million] to Iraq for 2017. This loan will allow the country to access international funding programmes with greater ease, something which is key to helping the reconstruction phase.

This visit also gives new momentum to the relationship between France and Iraq in all areas. France wishes to develop its links with Iraq in all fields, including political dialogue, economic relations or cooperation efforts.