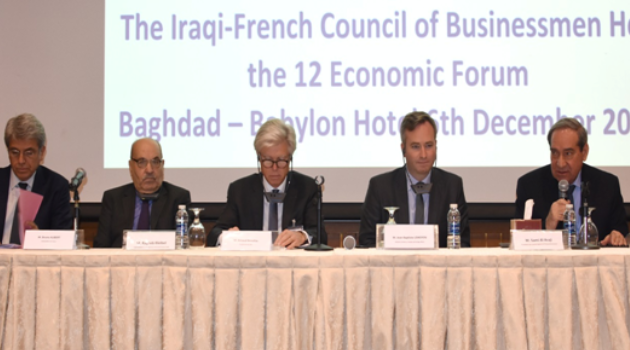 By Editor on 15th December 2017 in Iraq Industry & Trade News

The 12th Economic Forum of the Iraqi-French Council of Businessmen [Iraqi-French Business Council] was held recently in Baghdad.

Dr. Sami Al Araji, Chairman of the National Investment Commission (NIC) opened the forum with a welcoming speech to the attendees including the Iraqi Minister of Trade, French State Minister for the Foreign Trade Affaires, the Iraqi Governor of the Central Bank and a number of governors, Vice Ministers, Consultants, Director Generals, Heads of Provinces’ Councils, Chairmen of Commercial Chambers and Unions, company owners and businessmen.

Mr. Jack Batist Lomowan, French State Minister for the Foreign Trade Affaires concentrated in his speech on the deep relation between the two countries and the serious wish of both governments to enhance this relation in various fields disregarding the big challenges Iraq is facing now.

He considered this meeting as a step towards the next donors’ conference in Kuwait. He also mentioned the most important French companies which are interested in working in Iraq in addition to the new ones that are eager to start business here. Oil & Gas, energy, water, and infrastructure are main sectors in Iraq in addition to agro industries and medication plus having the French TALS Co. for fund Insurance and protection for the French companies working in Iraq as France has landed Iraq $450-billion aiming at supporting the Iraqi-French relations specially after the Iraqi Prime Minister visit to Paris last October.

He ended his speech by referring to the importance of mutual trust bursting from real political desire of the two leaders to move ahead with the two countries relation and find mutual responsibility and in common interests.

Mr. Raghib R. Blaibil, head of The Iraqi- French Council of Businessmen, considered this forum is a precious opportunity for Iraqi and French businessmen to meet and discuss the fruitful business potential for both sides. He also mentioned the improvement in the economic situation after defeating ISIS in Iraq and the victory our security forces achieved on the ground.

The will be for reconstructing, bringing the displaced back to their homes and the elevated oil price are strong factors encouraging us to invite the French companies to work and invest all over Iraq strongly and freely with no hesitation or fear.

Mr. Blaibil addressed the French airlines companies to start a direct line between Baghdad and Paris after the Iraq opened its airs to the international civil aviation.

The Iraqi-French Council of Businessmen representative Mr. Arnold Brolack inquired about sectors Iraq is willing to invest with the French side and what Iraqi aid is available to achieve tangible results after unifying the two parties’ views.

Mr. Ali Al Alaq, Governor of the Central Bank, long speech emphasized on the successful financial policies of the Central Bank of Iraq during the past years. These policies, in cooperation with the Ministry of Finance, saved Iraq from the sudden oil price drop shock and unstable economic situation.

The second session started later where bilateral discussions between the Iraqi and the French parties in different economic sectors took place.