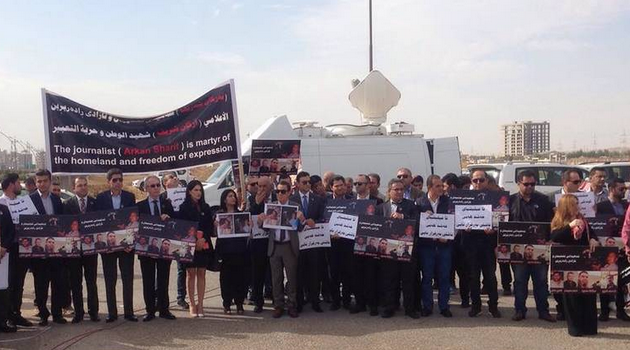 By Editor on 7th February 2018 in Iraqi Communications News, Security

The International Federation of Journalists (IFJ) has denounced the multiple media freedom violations in the Iraqi Kurdistan region documented in a new report by IFJ affiliate the Kurdistan Journalists Syndicate.

The 2017 annual report of media freedom violations, published by the KJS’ Committee for the Defense of Press Freedom & Rights of Journalists, reveals that as the intensity of the rivalry between political parties increases, incidence of violations against journalists and media organisations also increase as they face revenge by the belligerents.

Several media have been blocked during and after the referendum in the Kurdistan region to secede from Iraq and especially during the follow up military campaign by the Iraqi central government to regain control over Karkuk and other areas controlled by Kurdish forces.

Turkey and Iran also closed down offices of media organizations seen as promoting the vote for independence while the Kurdistan regional government closed down (a) TV channel(s) which took an anti-independence editorial line.

Four journalists were killed in the region in 2017, 30 journalists were arrested, 5 were wounded, 39 suffered from physical attacks, 111 were restrained and 18 were threatened. In addition, 3 media houses were burned down and 13 channels were shut down.

“The IFJ condemns all the attacks documented by our affiliate against our colleagues in the region and urges the various parties to stop using the media in their political fights,” said IFJ General Secretary, Anthony Bellanger. “Both the Kurdistan Regional Government and Iraqi central government must take immediate steps to show that they are serious about fighting impunity in the attacks against journalists in Iraq.”