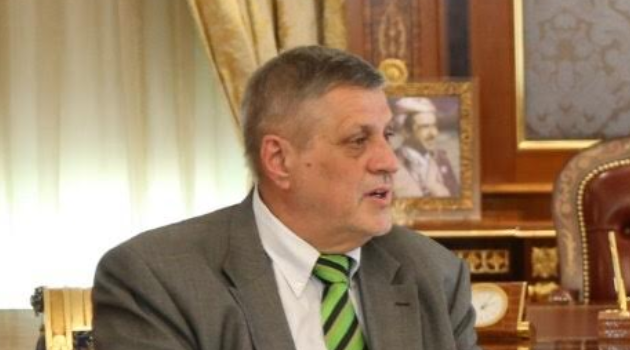 By Editor on 15th March 2018 in Politics, Security

In the wake of recent criminal and terrorist acts that targeted members of minority communities in Iraq, the Special Representative of the United Nations Secretary-General (SRSG) for Iraq, Mr. Ján Kubiš (pictured), stresses the need for the government to take active steps to support and protect these communities, to ensure the return of minorities who suffered from Daesh persecution to their homes, and urges the religious, political and civic leaders as well as the general public to stand up for their fellow vulnerable citizens.

Christians are one of the ancient communities in this country, dating back to the early days of Christianity and Mesopotamia. This indigenous community, which in the 1980s counted almost 1.3 million, has dwindled to an estimated 400,000 today, according to community leaders.

Most recently in the last three years, they suffered from the Daesh terrorism, notably their communities in Ninewa Governorate, but also from criminal acts in many other parts of the country, including in Baghdad where three Christian family members were killed last Thursday by armed men who stormed their house and stabbed them to death.

Also last week, a member of the Sabean Mandaean community was kidnapped from his shop in Baghdad and his body was later found on a street. In Nassiriyah in the south, another Sabean Mandaean was stabbed at his shop but survived after his Muslim neighbours came to his aid.

“Iraq draws its strength from its cultural and religious diversity, and its rich history. This treasure should be protected and nurtured by the Government and the people of Iraq,” Mr. Kubiš said. “I call on government, religious, political and civic leaders to stress this point once and again – in the new Iraq, where the unity of the people defeated the most evil of organizations Daesh, there is no place for intolerance and discrimination, for targeting and suppressing minorities. I urge the government to support and protect the minorities, including Yezidi, Christians, Shabak, Sabean Mandaeans, and others. Iraq needs all its components, all its ethnic and religious groups, to rebuild in the post-Daesh period and prosper in the future as a stable and united country.”