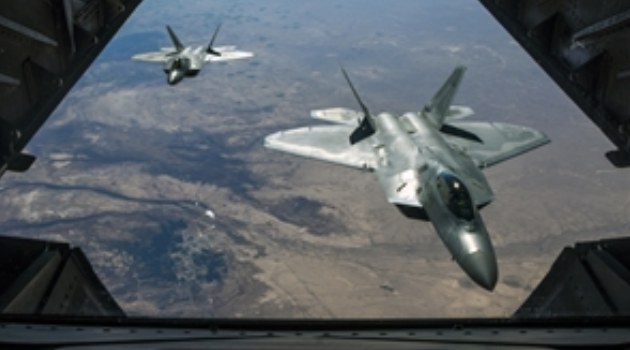 Airpower has been a key factor as Operation Inherent Resolve continues to achieve milestones in the fight against the Islamic State of Iraq and Syria, a senior OIR officer told Pentagon reporters via satellite from Baghdad today.

“Coalition airpower in support of the Iraqi security forces has been extremely successful in the destruction of ISIS in Iraq,” said Air Force Brig. Gen. Andrew A. Croft, deputy commander for air in OIR’s Combined Joint Forces Land Component Command.

“From the herculean effort in Mosul to the rapid victories in Tal Afar, Hawaijah and westward through the Euphrates River valley, the coalition supported the Iraqis by, with and through strategy,” Croft said.

The strategy has been “wildly successful,” he added, enabling Iraqi security forces to reclaim their territory from a “barbaric enemy” and allowing coalition forces to minimize their footprint in Iraq.

Coalition bombs dropped in Iraq and Syria last week were the lowest total since the beginning of OIR in 2014, an indication that ISIS is totally fragmented, Croft said, though some ISIS remnants are still in Iraq.

The coalition’s job now is to enhance these capabilities within the Iraqi aviation enterprise through its train, advise and assist mission,” Croft said. A coalition aviation and training team, or CAAT, stood up in February to leverage the U.S. and coalition forces already deployed to Iraq, the general told reporters.

“We will do this by working with pilots, technicians and planers to increase the effectiveness in areas such as basic and advance flight training support to Iraqi ground forces, medical evacuation, aircraft maintenance and logistics,” he explained.

The Iraqis already have achieved several milestones since the CAAT stood up, Croft said, including reopening their air force academy in late February.  Iraqi forward air controllers conducted a live-fire exercise in early March, he added, calling in training airstrikes from coalition aircraft for the first time.

By midsummer, he said, the CAAT will be an air force wing manned by about 350 U.S. members and 100 to 120 coalition members.