By Editor on 14th April 2018 in Leisure and Tourism in Iraq, Politics

The despised ex-leader of Iraq built luxurious palaces with hundreds of rooms in Tikrit, near his hometown. Now the local council wants them turned into money-making museums.

Some might say the formerly-luxurious palaces built by Iraqi autocrat, Saddam Hussein, in Tikrit are a metaphor for how things have developed since 2003.

Tikrit is often known as the “city of palaces” due to the fact that Saddam Hussein, who came from a nearby village, built dozens of luxurious residences and halls, often along the banks of the Tigris river here. It has been suggested there are anywhere between 60 and 136 such mansions in the area. The largest are well known and often hark back to ancient Iraqi or religious history. For example, one, which has 360 rooms, is called Dhu Al Fiqar, after a mythical sword in Islamic history and the buildings are sword-shaped.

The gardens are planted with trees brought from all over Iraq and there are miniature lakes and swimming pools galore.

But today, many of the palaces and their facilities stand in ruins. They’ve been occupied by different military forces and put up for sale. Local authorities and the federal government have both failed to preserve them even though public interest in them is high. Today they are more like ruins or rubbish dumps, and their state of repair has only worsened since the city was occupied by the extremist group known as the Islamic State in 2014.

“The presidential palaces have been offered for sale more than once,” explains Tami Saab, deputy director of the Salahaddin Investment Commission. “But the main reason that investors are scared to put money into them is because they are occupied by militia groups and security forces, many of whom have refused to leave the buildings, both before and after the Islamic State group was here.” 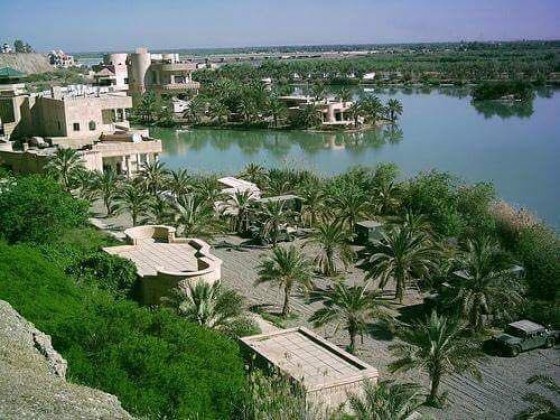 Because the palaces are isolated and easy to defend, they are still often used by security forces. And, as Saab says, the military men are refusing to vacate the premises even though the local government has asked them to.

The parliamentary committee on economics in Baghdad has said they would put the development of the palaces out to tender, inviting bids much as they do for Iraq’s oilfields. The bidding would include former palaces of the Iraqi dictator right around the country, not just in Tikrit.

In announcing this plan, the committee noted that there were 136 palaces in and around Tikrit itself, some of them designed by international architects, boasting everything from unique security features such as walls made to resist heavy weapons, to rare marble, pools and vast interior spaces.

Unfortunately, the Iraqi security forces and militias have been in the presidential palace complexes since April 2015, Fadhil al-Dujaili, a member of Salahaddin’s provincial council, told NIQASH. “The complex is now closed and most of the palaces were destroyed either by the Islamic State group or by air strikes against them.”

But he still has hope for the palaces. They “could be used to generate tourist dollars for Tikrit,” he argues. “Especially as this area has further important sites, including the ‘Green Church’, one of the oldest churches in the Middle East, and the house where Salahaddin al-Ayubi [the first sultan of Egypt and Syria] was born. Many tourists also want to visit Saddam’s places to see how he lived. This could provide our people with hundreds of job opportunities,” he argues.

Even today there are dozens of visitors to certain sites within the palace complex and not all of them are for pleasant reasons. Many journalists, mourners and delegations come to visit one particular palace courtyard overlooking the Tigris. It was here that in June 2014, the extremists of the Islamic State executed an estimated 1,700 air force cadets in cold blood and threw some of their bodies into the river in what would come to be known as the Camp Speicher massacre. Other victims were buried in the palace grounds and search teams are still trying to excavate their bodies.

Dozens of families come here to mourn their lost sons. They leave flowers, paint the walls with henna and pray and cry on the site. The Iraqi government has made special arrangements to host the mourners here and has declared a special memorial day too.

While some locals believe the palaces of Saddam Hussein should be restored as part of Iraq’s chequered recent history, others believe that they should be left to their own disintegration, taking the bad memories with them.