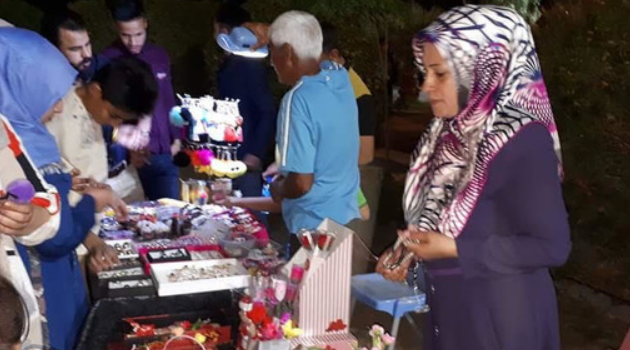 A small group of Kirkuk women have set up a market of their own, selling handicrafts and home-made jewellery. It’s an opportunity to make money for their families but also makes them a target.

A small crowd of shoppers is milling about in front of two tables on the street in central Kirkuk. Their reaction to the women behind the tables, who are selling trinkets as well as jewellery they have designed and made themselves, varies.

Some make a small purchase and encourage the women. But others made disparaging remarks. Usually accessories and jewellery like this are sold in stores by men and the stock is often made in China.

When she first started making jewellery and selling it on the street, her family were opposed, says one of the organisers here today, Falilah Hamid.

“My parents didn’t like the idea of me standing on the sidewalk, because they know society has an ugly idea of women working and they were worried how passers-by would react,” she explains to NIQASH. “But my husband was the first to support me.”

Hamid is from Baghdad originally but moved to Kirkuk in 2005 after an escalation in sectarian violence in the south. Her son is ill and the family had a hard time making ends meet. So Hamid started making small trinkets, bracelets and earrings as well as traditional wedding decorations. Hamid also sews the latter and obtains her materials from Baghdad, a city she still loves, as well as from the larger Kurdish cities of Erbil and Sulaymaniyah.

Then she set up a stand on central Quds Street and, despite getting harassed just as she expected, she has not given up. More recently she has been joined by other women, who are also making money for their families by selling handicrafts. Hamid, who is in her 40s, says there are now about 12 local women involved and all of them take great pride in their designs and creativity.

Next to Hamid is Nour, a 20-year-old student at the University of Tikrit. She is earning a living selling her handmade jewellery and continuing to study accounting at the same time; she’s in her final year at university and hopes to eventually get a government job to help her family. For now though, she is working here as well as trying to sell her designs through Facebook shopping sites.

It’s not always fun, Nour admits. “Standing in the streets is hard and we get all kinds of reactions,” she explains. “But my father is sick and cannot work so this job brings in money for myself and my family. Sometimes my father helps me by carrying my table to the streets,” she says, adding that he often sits with her too, to prevent people from harassing her or the other females.

Hamid says one of the most important things about the small stall holders’ initiative is that the sales can help support divorced or widowed women in Kirkuk, who have no other way of earning an income.

“I hold small workshops for women to teach them the different crafts and cookery,” she says – the stall holders also sell snacks.

“Hamid is an excellent cook,” says her excited husband, who has been listening the whole time. “Her food is like meals in the best and most expensive restaurants,” he says. And with support like this, this small women’s market in Kirkuk is bound to keep going, no matter what the critics mutter as they walk past.