By Editor on 8th May 2018 in Ahmed Tabaqchali, Investment

The market’s consolidation continued for the second month running with both turnover and the market continuing to decline. Average daily turnover declined by about -57% from that of the prior month, itself down about -15% from the preceding month. The market, as measured by the RSISUSD Index, paced these declines, down -5.8% for the month (see chart below) but up +10.1% YTD.

While a monthly market decline of -5.8% following a -2.6% decline the prior month might be thought of as a correction and a not a consolidation. Yet the term consolidation is more appropriate given the internal market dynamics which are not captured fully by the RSISUSD Index given its heavy representation by banks with a 51% weighting and almost 40% of that accounted for by lower-quality banks. 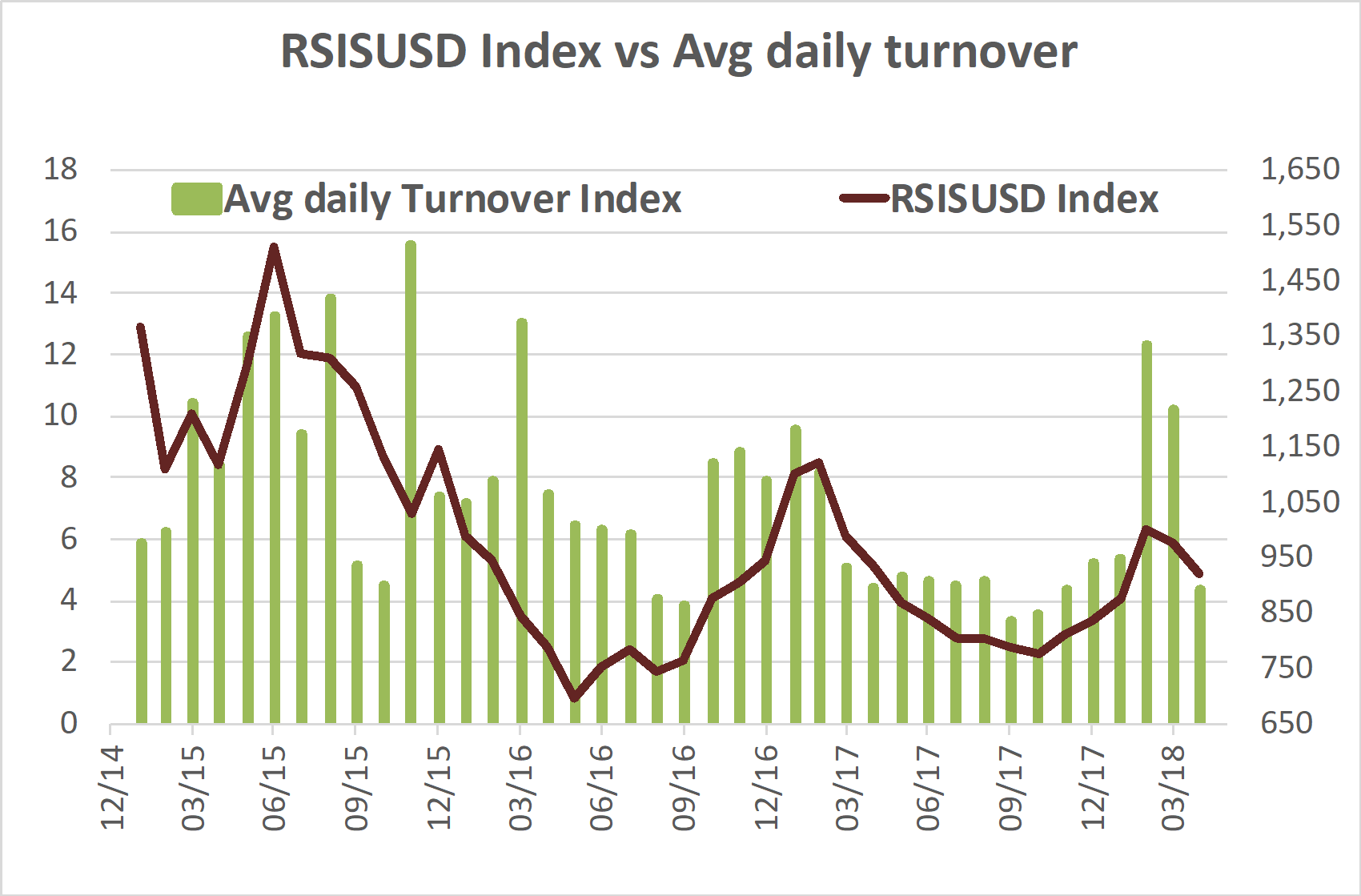 Buying by both locals and foreigners continued in the high-quality names such as mobile operator Asiacell (TASC) and Pepsi bottler Baghdad Soft Drinks (IBSD), up +68% and +49% respectively YTD. Foreign buying in these names has been consistent and persistent since early December, 2017 driven by improving fundamentals as discussed in January’s article. The high-quality banks which joined the rally in February, discussed in February’s article, have been dragged lower over the last two months by concerns over the earnings outlook for the lower-quality banks.

This concern has been driven by the declining margins on foreign exchange dealings as a consequence of the narrowing of premium of the market price over the official exchange rate of the Iraqi dinar (IQD) vs the USD, as will be explained below.

As discussed in the last few months, increasing signs of an improvement in liquidity in the broader economy have resulted in steady improvement in the market price of the IQD vs the USD, lowering its premium over the official exchange rate to 1.2%- the lowest point in a number of years from just under 6% at the end of 2017, and  10% at the end of 2016 (see chart below). Although, the premium would likely return to the 2-4% range once this liquidity feeds into increased consumer spending and the resultant increase in demand for imports. 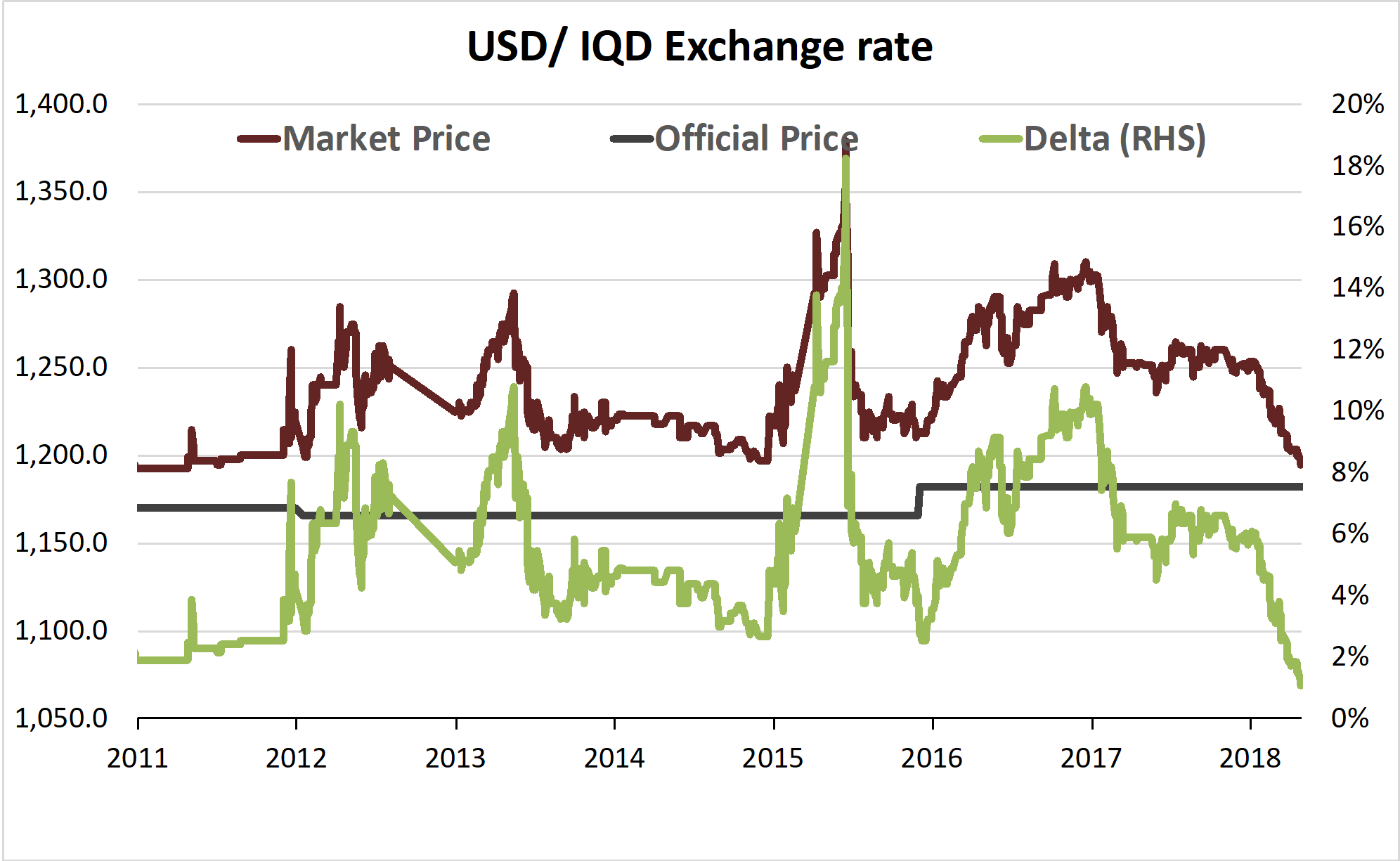 The Central Bank of Iraq (CBI) conducts daily currency auctions in which participating banks buy the USD at the official exchange rate on behalf of clients: international transfers mostly to finance private sector imports, and fixed/limited cash payments to meet citizen’s needs for travel. The attractiveness of buying the USD at the official rate and selling it at the market rate has made the system susceptible to abuse and has led to lower-quality banks focusing on it almost exclusively as a source of revenues.

Higher quality banks, in particular those majority owned by regional banks, have either avoided the auctions or tended to use them sparingly especially in the last two years. The upshot is that while FX spreads constitute the bulk of earnings for the lower quality banks, they are one of many sources of revenues for the higher quality banks.

Worries on the banks’ earnings power from shrinking FX spreads have been one of many reasons that high-quality banks have outperformed the lower-quality ones in the last few months, yet the speed of the narrowing of FX spreads has led to fears that this would affect the higher quality banks in a similar fashion. Coupled with foreign selling in some of the higher-quality names exasperated these declines and resulted in them trading at valuations that are at extreme odds to the underlying improving fundaments in their outlooks.

These are the bottoming of the negative developments that prevailed over the last three years, i.e. declining/negative deposit growth, declining/negative loan growth and increasing non-performing loans (NPL’s). Their outlook is brightening as the expansionary effects from the reversal of the escalating costs of conflict and collapsing oil prices that crushed the economy in 2014 provides them room to recover further and grow.

The valuations of the higher quality banks are as attractive as they were in mid-2017, discussed in the July 2017 article, but the current outlook and the state of the economy are significantly better today.  The table below is a snapshot of current valuations of three of the “bluest-chip” banks, but to appreciate the significance, a quick review of the banking sector:

(Source: Company reports, ISX, AFC, Data based on latest trailing 12 months)
(Note: Prices as of 03 May 2018. Fundamental data from the latest quarter (unaudited) and not average of last two years as in the last few quarters some banks have cut their loan books significantly through increased provisions and write-offs and enforcing loan repayments)

As reported in the March article, the improved government finances have yet to be reflected in a return of liquidity to the economy as measured by growth in broad money supply.  While this is likely to happen over the next few months, the timing would probably be delayed and complicated by the uncertainties and government paralysis ahead of the parliamentary elections on 12th May, and the subsequent negotiations over the formation of the new government.

The low turnover during the month, a likely function of the uncertainties during the election season, underscores that the increased liquidity in the form of both local and foreign inflows reported over the last few months needs to be maintained for the market’s consolidation to lead to further recovery and for this recovery to be sustainable.

The backdrop continues to be positive as the sustained improvements in government finances should ultimately lead to better market action. The time lag involved coupled with the election uncertainties, implies the recovery will likely unfold over the next few months and it will likely be in fits and starts with plenty of zig-zags along the way. Which continues to underscore the opportunity to acquire attractive assets that have yet to discount a sustainable economic recovery.

For those who have not been to Baghdad recently, this article is worth a read as it shows that the decline of violence is felt with a return of night life in Baghdad.